Located 12km south of present day Luoyang City of Henan Province, the Longmen Grottoes, also known as Longmen Cave, overwhelming depict Buddhist subjects. Along with the Mogao Caves (in Gansu Province) and Yungang Grottoes (in Shanxi Province), the Longmen Grottoes are one of the three most famous ancient sculptural sites in China and were inscribed on the UNESCO World Heritage List in November 2000.

According to the Longmen Caves Research Institute, there are 2345 caves and niches, 2800 inscriptions, 43 pagodas and over 100,000 Buddhist images at the site. 30% of the caves date from the Northern Wei Dynasty, 60% from the Tang Dynasty, and caves from other periods less than 10%. It is the most impressive collection of Chinese art from these dynasties, and, dating from 316 to 907 CE, represents the zenith of stone carving in China. 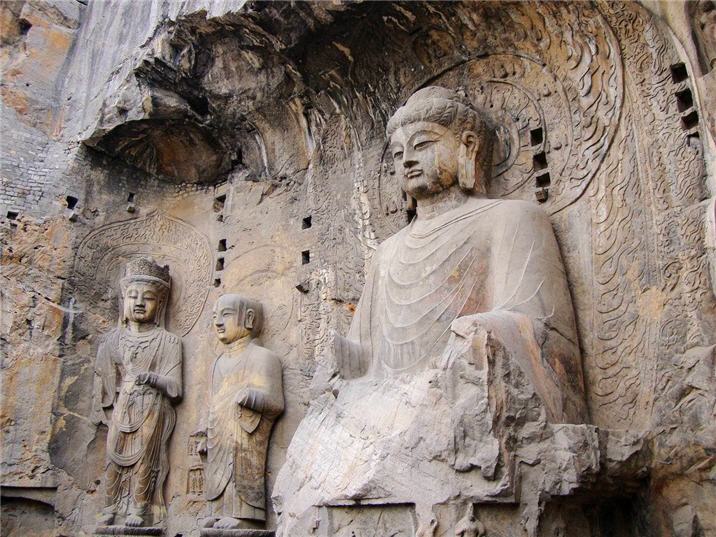 Built in the Tang Dynasty, Fengxian Temple is the largest grotto in Longmen Temple with a width of 36 meters (about 118 feet) and a length of 41 meters (about 136 feet). There are nine figures of various facial appearance and temperaments in the temple, of which the statue of Vairocana Buddha is the most impressive one.

In the height of 17.14 meters (about 56.23 feet) with the head of 4 meters (about 13 feet) in height and the ears of 1.9 meters (about 6.2 feet) in length, Vairocana Buddha is deserved to the fame as the largest outdoor stone sculpture of Buddha.

By the sides of Vairocana there are two statues of Vairocana Buddha’s disciples, Kasyapa and Ananda. Other figures such as Bodhisattvas and Devas are presented in the temple as well.

As a typical chronological cave of the Tang Dynasty, Wanfo Cave, which means literally in English 10,000 Buddha Cave, is another well celebrated site. Actually, the number of Buddha statues is 15,000 and they are chiseled in the southern and northern walls of the cave.

The main Buddha Amida sits on the lotus Sumeru throne, behind which the wall is carved with 54 lotuses upon which there are 54 Bodhisattvas in different shapes and with various expressions.

Guyang Cave is the original, featuring more than one hundred small scale carvings of Buddha, highlighted by a 7.8-meter (about 25.5 feet) tall likeness of Sakyamuni-the first Buddha in history.

Binyang Cave presents stone carvings with a much grander scale than that in Guyang Cave but the main roles Sakyamuni and disciples remain here as well.