Located at the foot of Mount Song, 12 km from Dengfeng City in Henan Province, the Shaolin Temple (also known as Shaolin Monastery) is a Chan Buddhist (Zen Buddhist) temple. Founded in the 5th century, the monastery has been long renowned for its association with Chinese martial arts and particularly with Shaolin Kung Fu.

Also known as “Chinese Martial Arts”, Kung Fu is a specialty of Shaolin Temple. It is said that Shaolin monks have been practicing Kung Fu for more than 1,500 years. Traditionally, Shaolin Kung Fu is a way of improving health and self-protection in many Chinese people’s mind. And to Westerners, Shaolin Kung Fu is one of the most familiar things they can think of China. 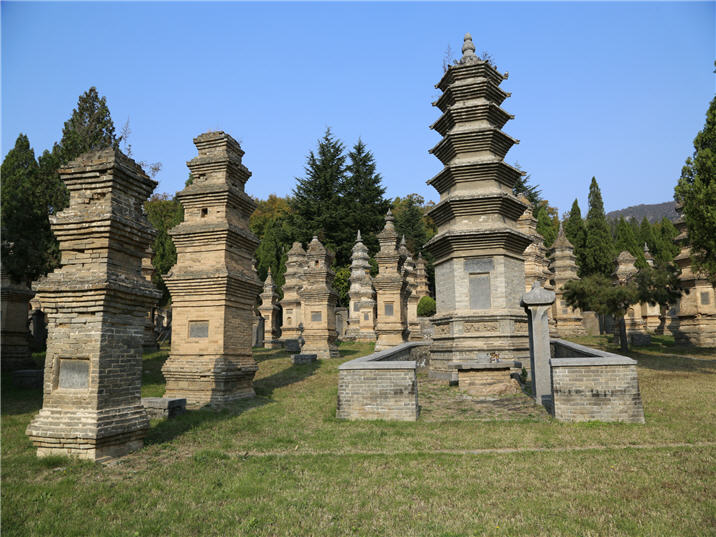 As the a Mahayana Buddhist monastery best known to the Western world, Shaolin Temple attracts visitors from all over the world, not only for its exquisite buildings such as the Hall of Heavenly Kings (Tianwang Hall), the Mahavira Hall (Daxiongbaodian), the Pagoda Forest, and the Dharma Cave, but also for its particular culture of Kung Fu.

The Mahavira Hall is a place where significant event of Shaolin Temple are held. Inside presents figures of 18 Buddhist Aehats, and Kingaro (the founder of Shaolin Cudgel) and Dharma (the founder of Chinese Chan Buddhism). Another special attraction of the Mahavira Hall is about 50 small pits on the ground with a depth of approximately 20 centimeters (about 7.87 inches), which are regarded left by Shaolin monks when practicing Martial Arts.

Pagoda Forest, also well-known as “Forest of Dagobas”, refers to the 228 stones or brick pagodas built from 791 AD of Tang Dynasty through the Ming Dynasty, Song Dynasty and the Yuan Dynasty to today. The Pagoda Forest in Shaolin Temple is the largest one in China and named a national scenic spot in 1996.

Storeys of these pagodas must be odd numbers (from 1 to 7) and attributed to the achievements of the Buddhist masters for whom the pagodas were built. In addition, pagodas have various shapes, mainly round and square, which are affected by the different eras, so does the number of sides of the pagodas.

With a depth of 7 meters (about 23 feet) and a height of 3 meters (about 9.8 feet), the Dharma Cave is natural stone cave about 10 meters away from Wuru Peak. Legendarily it was a place where Dharma faced the wall and has deep meditation for almost 9 years. And a stone called “Dharma’s Shadow Stone” is standing in the cave that is said the shadow belongs to Dharma for his persistent meditation before the stone.

1. From Luoyang: Take a tourist bus from Luoyang Bus Station to Shaolin Temple (about 1.5 hours).

Tips: There are two cableways in the scenic area, if you’d prefer an easier hike heading to cable car to Sanhuangzhai (Round trip: 60 yuan). The cableway could be found just beyond Pagoda Forest.