According to Chinese ancient history, the White Horse Temple is the first Buddhist temple in China, established in 68 AD under the patronage of Emperor Ming in the Eastern Han capital Luoyang. This small-sized temple is considered by most believers as “the cradle of Chinese Buddhism”.

White Horse Temple has numerous halls divided by several courtyards and manicured gardens, covering an area extending to about 13 hectares (32 acres). Significant statues include Shakhyamuni Buddha, Maitreya-the laughing Buddha, the Jade Buddha, and figures of saints such as Guru Avalokiteshvara, Amitabha and arhats. Stone statues of the two white horses, which brought the Indian monks to China and of two mythical lions are seen at the entrance. 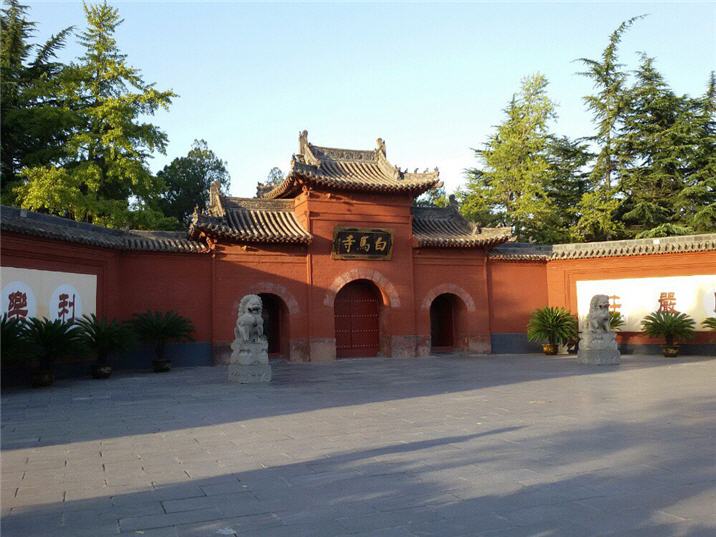 The temple boasts great antiques which has remained intact for over 1,900 years. The Hall of Heavenly Kings, Hall of the Great Buddha, Hall of Mahavira, Hall of Guidance and the Cool and Clear Terrace appear in the temple as they were first built.

As the first large hall in the temple complex, the Hall of Heavenly Kings presents the statue of Maitreya, known as the laughing Buddha, sitting in the forefront. This statue is flanked on the eastern and western sides by four heavenly kings, each representing one fourth of the universe. In addition, there is also a statue of Skana - a high ranking general and defender of Buddhist law - with back to the Maitreya statue.

Covered with exquisite pantiles, the Hall of the Great Buddha boasts the most spectacular architecture in the whole temple. A statue of the Buddhist patriarch Sakyamuni is presented in the middle of the hall, by which standing two of his disciples-Kasyapa and Ananda. All statues demonstrate a fairly high level of craftsmanship of the Ming Dynasty.

As the smallest hall in the temple, Hall of Guidance is the place where the Amitabha Buddha is worshipped. It is said that at the words of “Amitabha Buddha”, one will be led to the Paradise after death and therefore Amitabha is known as the Buddha of Guidance, hence the name of the hall.

As the most magnificently decorated hall in the temple, Hall of Mahavira attracts visitors with its fabulous roof that is carved with colorful lotus patterns and walls hung with thousands of the wooden statues of Buddhist figures.