The Qingjing Mosque, also named the Ashab Mosque, sits in Quanzhou downtown, covering an area of 2,500 square meters. The mosque is the oldest of the Arab style mosque in China, which was constructed in 1009. This glorious mosque is a representative of the friendship and cultural exchange between China and Arabic countries.

Facing south, the gate of the Qingjing Mosque is made of diabase and white granite and consists of four conjoined archways. Many of the gate's domes are carved with hanging lotus, symbolizing respect for sanctity and purity. Each carved lotus is surrounded by a web of liernes. A platform on the roof of the gate allows worshipers to appreciate the moon and to decide when Ramadan begins. On the east of the gate lie two stone tablets recording the reconstruction of the mosque in the Yuan (1271-1368) and the Ming (1368-1644) dynasties. Another stone tablet sits just near the gate, engraved with the imperial edict of Zhu Di - the third emperor of the Ming Dynasty. He spread this edict to protect the Mosque and the Islam in China. 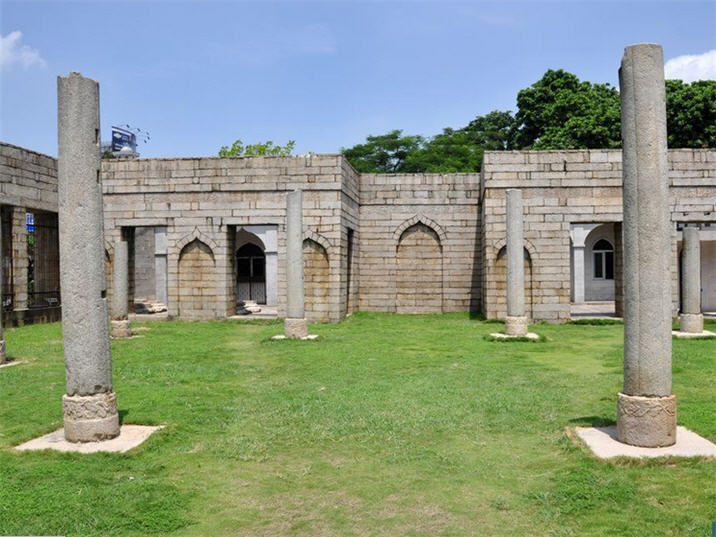 The spacious Fengtian Hall was once the main prayer hall of the Qingjing Mosque. The design depicts the popular architectural style of Islamic prayer halls of the 10th century. Unfortunately, the hall's spectacular roof collapsed in an earthquake, leaving only the granite walls intact. The ornamental walls house stone inscriptions of Alcoran, lit by the large windows.

Since Fengtian Hall had been destroyed by the earthquake, the Mingshan Hall in succession became the mosque's central prayer hall. The Mingshan Hall is a more Chinese style building lying in the northwestern part of the Qingjing Mosque. It is quadrangle, resembling a traditional residential style (common in northern China). Here the stone walls are decorated with Arabic inscriptions which could be dated back to the Song and the Yuan Dynasties.