The Quanzhou Maritime Museum is an ideal place for tourists to have a panorama view of trading history of Quanzhou and the development of Chinese shipbuilding. Established in 1959, The Museum was initially located at the Kaiyuan Temple, but was partly moved to its new location at the east of the East Lake Park. The Quanzhou Maritime Museum is the only museum in China specializing in exhibitions of historical relics relating to overseas transportation.

The Quanzhou Maritime Museum consists of an old and a new section. The old section, housed in the former Kaiyuan Temple, is used for exhibiting ancient boats. The new section, completed in 1991 and located on the scenic banks of East Lake, resembles a large sailing ship afloat on the sea. It covers an area of 3,000 square meters (32,000 sq ft) with a built-up area of up to 7,300 square meters (79,000 sq ft). There are four exhibition halls in the new section named “Quanzhou Maritime Exhibition Hall”, “Quanzhou Religious Stone Carving Hall”, “Quanzhou Ethnic Culture Exhibition Hall” and “Ancient Chinese Model Hall”. 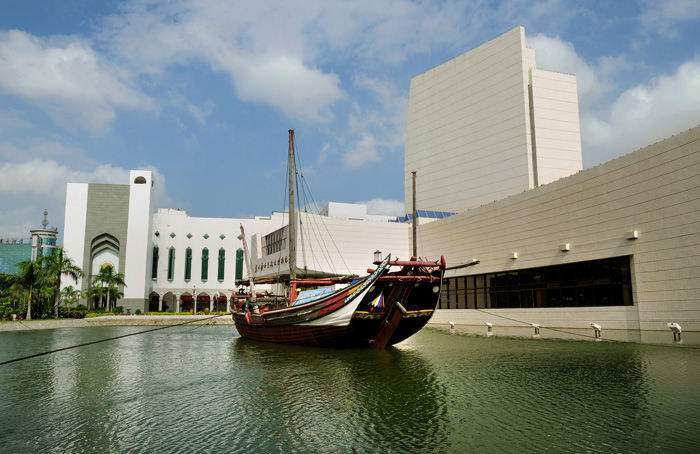 The Overseas Communications History Exhibition Center shows a large number of cultural relics and models. The relics fully illustrate the vicissitude of the ancient seaport of this city. The exhibits are divided into four categories, according to the historical events represented, and are displayed in different exhibition areas respectively. The exhibits paint a vivid portrait of Quanzhou's overseas trade throughout the past 2,000 years. Highlights include the portrayal of Zhenghe's successful travels to the Indian Ocean, which reflects the prosperity of China's overseas ventures during the Ming Dynasty (1368-1644).

The city of Quanzhou has always been the center of foreign trade and activities of China since ancient times. Nowadays, as the start of the Maritime Silk Road, Quanzhou would certainly play a key role in foreign relations. The city’s history is a crucial component of China’s overseas communication legacy, and the Quanzhou Maritime Museum depicts a formidable portrayal of the city’s sea-faring vicissitude throughout the ages.