Located about 3 kilometers from Quanzhou city, Mount Qingyuan is one of the most popular tourist attractions in Quanzhou. The Mount Qingyuan is a national park, covering an area of 62 square kilometers (15,321 acres). The park contains three major scenic features, the namesake Mount Qingyuan, and Mount Ling and Mount Jiuri. The highest point of mountain is about 500 meters above the sea level.

The centuries of development on Mount Qingyuan has imprinted various important historical and cultural artifacts. Such examples include nine huge Taoist and Buddhist stone sculptures, 600 stone inscriptions, and 3 granite stones. This includes the "Four Superlatives": the stone statue of Laozi; the Vedic stone statues of Buddha for Three Lives; the holy Islamic tombs; and the "pray for wind stone" inscriptions. The site also contains the shrine of Master Honyi.

The statue of Laozi is famed as being the largest stone carving of him made during the Song Dynasty. It is a Major Historical and Cultural Site Protected at the National Level; and measures 8.01m in length, 6.85m in width, and 5.63m in height, occupying an area of 55 square meters. 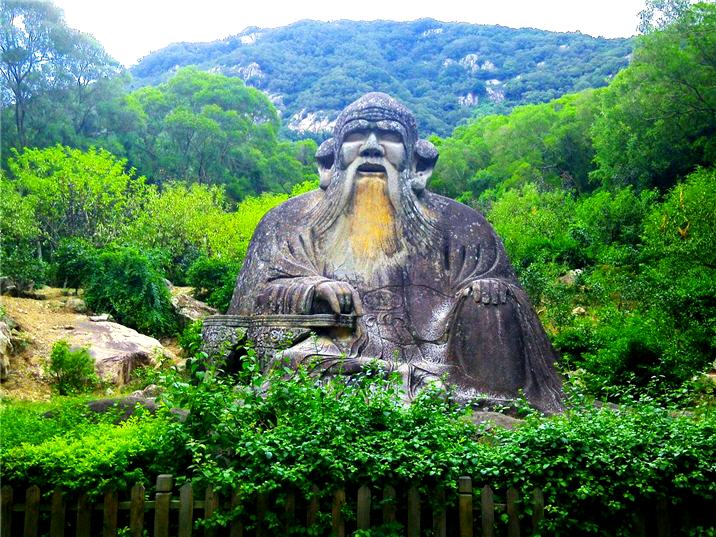 The Statues of the Three Buddhas (Tibetan Buddhism) stand in the Bixiao Grotto on Mt. Qingyuan. They were built during the Yuan Dynasty (1271-1368). The three Buddhas are set in a rectangular niche and each sits on a lotus flower throne. In the middle is Sakyamuni with his right hand touching the ground. On the left is Dipamkarara who has an alms bowl in his left hand. On the right is Maitreya who sits in meditation. All three Buddhas exemplify the fine carving skills of Yuan Dynasty artisans.

The Holy Islamic Tombs standing at Mount Qingyuan is known as the best preserved and the oldest existing Islamic site in China. Two famous disciples of the founder of Islamism, Muhammad, were honored by the two tombs. There is a large stone in front of the tombs which would wobble when the wind blows or when someone push it slightly.