The Temple of Confucius, in Chinese called Kong Miao, is located in the central downtown of Qufu, occupying 140,000 square meters (34.6 acres). According to historical data, it was built in 478 BC, the second year after Confucius' death. The Temple of Confucius is a place used to worship Confucius, and together with the Confucius Family Mansion (Kong Fu) and the Cemetery of Confucius (Kong Lin), these three architectures are called "San Kong" ("san" means "three" in Chinese).

The Temple of Confucius is built on the site of Confucius' former residence, which features 100 magnificent buildings with the typical Chinese architectural style. The complex is one of the largest in China. It covers an area of 16,000 square meters and has a total of 460 rooms. Because the last major redesign following the fire in 1499 took place shortly after the building of the Forbidden City in the Ming Dynasty, the architecture of the Temple of Confucius resembles that of the Forbidden City in many ways. 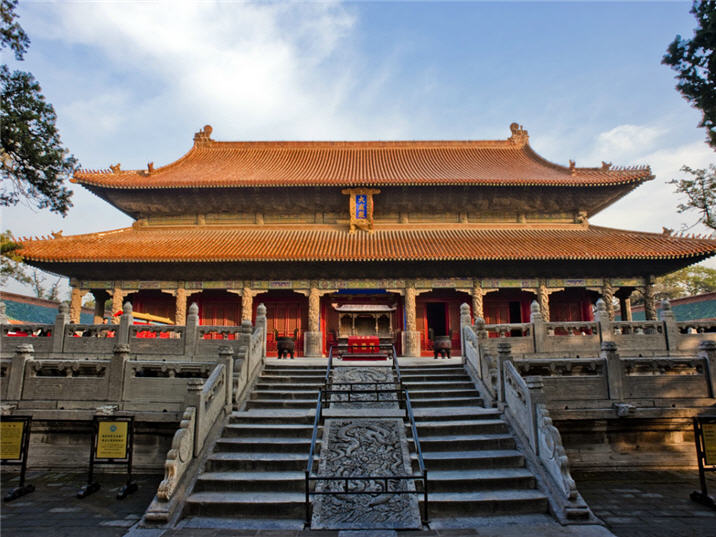 The main part of the Temple of Confucius consists of 9 courtyards arranged on a central axis, which is oriented in the north-south direction and is 1.3 km in length. The first three courtyards have small gates and are planted with tall pine trees, they serve an introductory function.

The Hall of Great Accomplishment, the major hall, is the highest building in the Temple as well as being one of the three largest ancient halls in China. The Hall enshrines the statue of Confucius in its center. Located in front of the Dacheng Hall, Apricot Altar is said to be where Confucius preached. There are 1,044 inscribed steles (149 BC-1949 AD) stored here which are precious historical materials for studying the politics, economy, culture and art of the feudal society. There are also many carved stones, including the famous Han (206 BC-220 BC) stone reliefs, Ming (1368-1644) and Qing (1644-1911) carved stele and Ming carved paintings of the Sage's Traces.

The buildings in the remaining courtyards form the heart of the complex. They are impressive structures with yellow roof-tiles (otherwise reserved for the emperor) and red-painted walls, and they are surrounded by dark-green pine trees to create a color contrast with complementary colors.