Also named as Southern Temple for its location in the southern Datong, the Shanhua Temple is one of the best preserved temples of Jin Kingdom, a kingdom coexisting with Southern Song Dynasty. Covering an area of nearly 14,000 sq meters, the Shanhua Temple has three main buildings: the Gate, the Hall of the Three Saints, and the Grand Hall (Da Xiong Bao Dian).

The Hall of the Three Saints (in English also means the Three-Sage Hall) is the middle hall, where presents statues of the three sages of the Avatamsaka Sutra-a central one of Vairocana (the universal aspect of Shayamuni) and two accompanying statues of Manjusri and Samantabhadra. The hall is 5-bay wide, 4-bay deep, and has a single-eave roof, under which the arch is majestic and typical. The hall is spacious. In the 2 side-rooms there are 60 inclined arches like a flower in blossom. 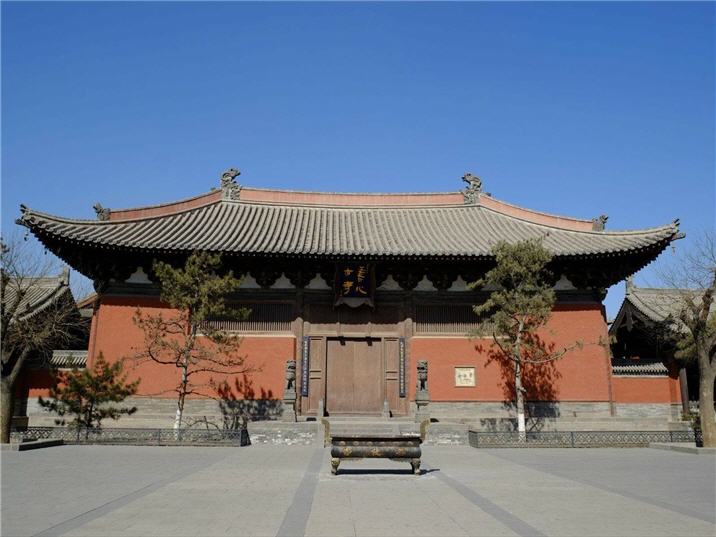 As the northernmost and largest hall, the Grand Hall, with a more official name “the Mahavira Hall” (“Da Xiong Bao Dian” in Chinese), dates back to the 11th century. The hall is 7-bay wide, 5-bay deep and has a single-eave roof with 5 ridges. The roof is slightly gradient and in the center of the hall there are 2 sunk panels, inside which are 2 layers of arches. The interior contains four large Buddha statues representing the four cardinal directions, and a central statue representing Sakyamuni.

Transportation: You could take bus Line 17 to get to the Shanhua Temple