Recently, a massive "arms dump" may have been unearthed by archeologists in a pit at the Mausoleum of Qin Shihuang.

The Mausoleum of Qin Shihuang is considered to be one of the largest and most finely structured emperor tombs in the world. Accompanying a pit currently under excavation is a 13,000 square-meter underground chamber within the necropolis complex. There are indications that it is probably a large arms dump. 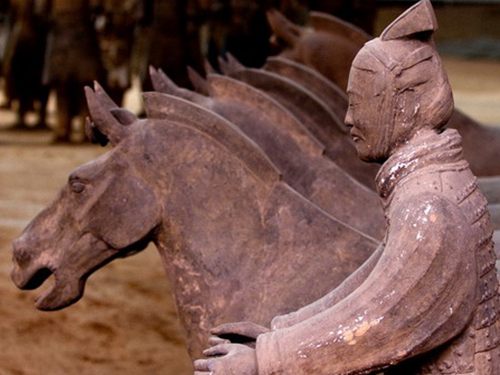 The pit is located to the southeast of the mausoleum, between the inner and outer cities. 200 meters away from the tomb mound, the 130 meter long, 100 meter wide rectangular pit is the largest accompanying pit yet discovered within the mausoleum walls. To date, 87 pieces of armor and 43 stone helmets have been excavated from the pit.

In this enormous pit, it is estimated that there are thousands of pieces of stone armor and helmets, as well as bridle reins, components of bronze chariots, bronze adzes, arrowheads and other military equipment that have also been unearthed previously in Pit No.2. Therefore, experts believe this pit would be more aptly described as the “arms dump” of the underground palace.