The ancient rock carvings of the Huashan Mountain in Guangxi Zhuang autonomous region has been submitted for World Heritage status in 2016, announced by China's State Administration of Cultural Heritage recently.

The rock paintings of Huashan Mountain are located on the west bank of the Mingjiang River in the Yaoda town, Ningming County, Guangxi Zhuang autonomous region. It is the biggest, most content-rich and best-preserved ancient rock carvings in China among all the discovered cultural relics to date. With a history of around 1800-2500 years, the sites were left from sacred activities of the ancient Luoyue people of the Zhuang ethnic groups in the drainage area of the Zuojiang River during the Warring States period (475-221BC) and Eastern Han Dynasty (25-220AD). 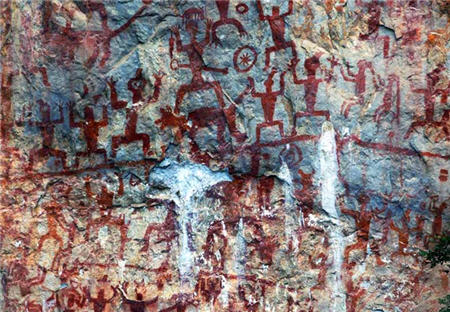 The whole painting stretches more than 200 meters in length and around 40 meters in height, with more than 1800 images in it, including people, horses, dogs, knives, swords and drums. Though a variety of archaeological theories have been made to explain the origin of the ancient artistic work, the exact reason for its creation still remains a mystery.