Four animal heads of Yuanmingyuan on display in Jinan

The four of Yuanmingyuan bronze animal heads are on display at the Shandong Museum in Jinan on Dec 30. This exhibition also includes over 100 cultural relics of Qing Dynasty (1644-1911) and will last for 3 months.

The four figures (an ox, tiger, monkey and boar) are part of an original set of 12 sculptures representing the Chinese zodiac from Emperor Qianlong's zodiac fountain in Yuanmingyuan. In 1860, British and French troops looted the heads amid the destruction of Yuanmingyuan. 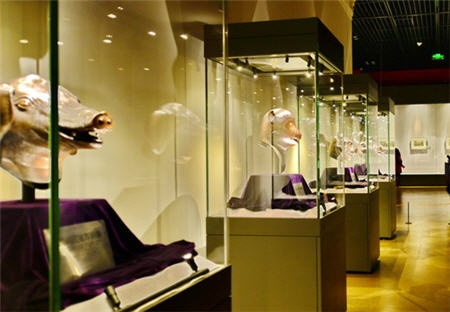 The sculptures have been a much-discussed issue in China in recent years. They represent a strong symbol for China, because of their beauty and the history attached to them. Today, seven heads - the rat, ox, tiger, rabbit, horse, monkey, and boar have been found. The dragon is claimed to be in Taiwan and the location of the other four- the snake, ram, rooster, and dog are unknown.