Statistics show that China has opened an average of 200 new museums per year over the past decade. Cultural heritage officials showed the big achievement in China’s main event marking the International Museum Day on May 18.

By the end of 2014, China had 4,510 registered museums, 345 more than the previous year, and 21.8 percent are private museums with a 2.3 percent increase. By contrast, China only had less than 350 museums before opening-up and reform in the late 1970s. Although the majority of museums in China are state-owned, the private ones account for nearly 20% these years and the number continues to grow.

Song Xinchao, deputy head of the administration and director-general of China Museums Association, said that China still has a long way to go to increase the number of museums and improve the contents and quality. The slogan of 2015 International Museum Day is "Museum, dedicated to sustainable development of the society." 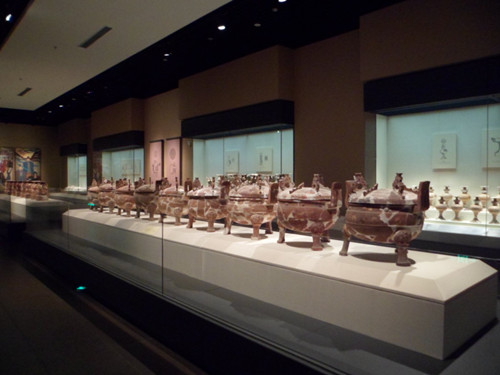 International Museum Day, organized by the International Council of Museums (ICOM), is a celebration aiming to raise public awareness on museums’ importance in the development of modern society. Usually, it is marked on May 18 every year.

After entering in ICOM in 1983, China has selected different host cities to organize the main ceremony to mark the special day. This year, Shijiangzhuan in north China, is selected to be the host and held a variety of activities in Hebei Museum. For example, the committee unveiled and announced the country’s top 10 best museum exhibitions in 2014. Hebei Museum also exhibited new collections for celebration since May 18.