On Feb. 5, 2014, people of the Dong ethnic group took part in a group singing and dancing activity in Baoli Village of Rongjiang County, southwest China's Guizhou Province. Dong People has the tradition to celebrate the Spring Festival with singing and dancing. 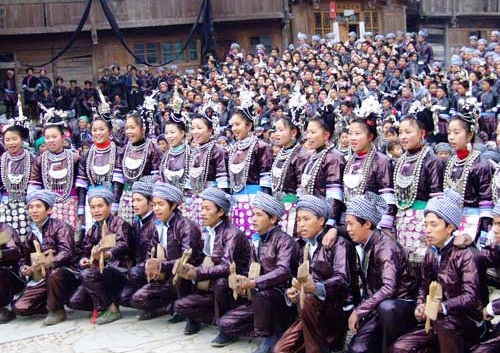 As one of the ethnic minority groups in China, the Dong people are believed to be the descendants of the ancient Guyue people. With a population of 2.6 million, Dong people are mainly distributed in eastern Guizhou, western Hunan, and northern Guangxi. The Grand Song is a kind of folk music and also a cultural treasure of the Dong people. It is a distinctive form of artistic expression in China. Performed without any help of musical instruments, it is similar to a cappella in the Western countries. Besides, the Grand Song is performed a huge group of people without the benefit of a conductor, which is featured by the complex structure and the rapid changes in rhythm of the chorus. Besides, the songs may be solo or chorus with multiple voice parts.