Zongzi or rice dumplings, is a traditional Chinese food always eaten on the Dragon Boat Festival on the fifth day of the fifth lunar month. Made of glutinous rice stuffed with different fillings and wrapped in bamboo or reed leaves, they are cooked by steaming or boiling.

The Origin of Zongzi

Zongzi are traditionally eaten during the Dragon Boat Festival, which falls on the fifth day of the fifth month of the lunar calendar to commemorate the death of Qu Yuan, a famous Chinese poet from the kingdom of Chu during the Warring States period. Known for his patriotism, Qu Yuan tried unsuccessfully to warn his king and countrymen against the expansionism of their neighbors in Qin State. When Qin general Bai Qi took Yingdu, the capital of Chu State in 278 BC, Qu Yuan's grief was so intense that he drowned himself in the Miluo River after penning the Lament for Ying. According to legend, packets of rice were thrown into the river to prevent the fish from eating the poet's body.

The Description of Zongzi

The shapes of Zongzi vary from tetrahedron in southern China to cylinder in northern China. Wrapping a Zongzi neatly is a skill that is passed down through families, so as the recipes. Making Zongzi is a traditional family event of which everyone helps out. While traditional Zongzi are wrapped in bamboo leaves, the leaves of lotus, maize, banana and shell ginger are sometimes used as substitutes in other countries. Each kind of leaf imparts its own unique smell and flavor to the rice. The fillings used for Zongzi vary from region to region, but the rice used is always glutinous rice. Depending on the region, the rice may be lightly precooked by stir-frying or soaked in water before using. Northern style Zongzi tend to be sweet and dessert like, while southern-style Zongzi tend to be more savory. Fillings of southern-style Zongzi would be salted duck egg, pork belly, taro, shredded pork or chicken, Chinese sausage, pork fat, and shiitake mushrooms.

The Variations of Zongzi

Jianshui Zong: Meaning "Alkaline Water Zong", these are typically eaten as a dessert item rather than as part of the main meal. The glutinous rice is treated with lye water, or potassium carbonate, giving them their distinctive yellow color. Jianshui Zong typically contains either no filling or filled with a sweet mixture, such as sweet bean paste. Sometimes, a certain red wood sliver is inserted for color and flavor. They are often eaten with sugar or light syrup.

Nyonya Zong: This Zongzi is made similarly as southern Zongzi. However, the filling is typically minced pork with candied winter melon, ground roasted peanuts and a spice mix. 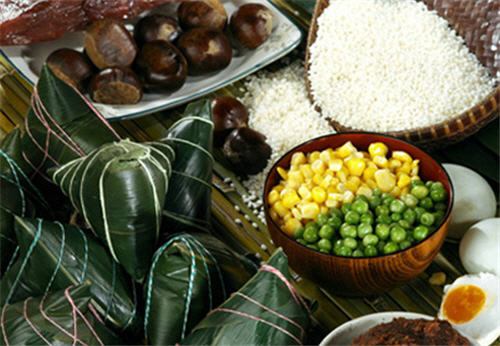