The Zang ethnic minority, also known as Tibetan, mainly lives in the Tibetan Autonomous Region on the Tibetan Plateau. Living on the world famous plateau, they boast a unique lifestyle and set of skills.

In the field of the arts, Tibetan calligraphy values strictness and delicateness, be it on steles or sutras; the Thangka and other Buddhist pictures, with fluent lines and bright colors, depict figures vividly; their architecture, like the Potala Place and Jokhang Temple, is charming and brilliant; the Zang people are famous for expressing their feelings through song and dance, notably the step dance and the masked Tibetan opera. 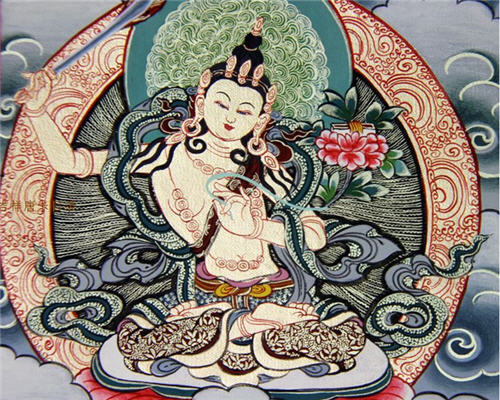 According to archeological findings, the ancestors of the Zang lived in the Brahmaputra River delta. Historical records suggest that the Zang were part of the Xiqiang group during the Han Dynasty (206 BC - 220). As the Han people stepped into the Tang Dynasty (618 - 907), they and the Zang developed a profound friendship, which culminated in the marriage of the Tang princess Wencheng and the leader of Tibet, Songtsen Gampo. Many believe that it was Princess WenCheng that first brought Buddhism to Tibet, where it quickly spread. The Zang people believe in the Indian Mahayana form of Buddhism but have gradually developed a distinctive Tibetan Buddhism which is also called Lamaism. 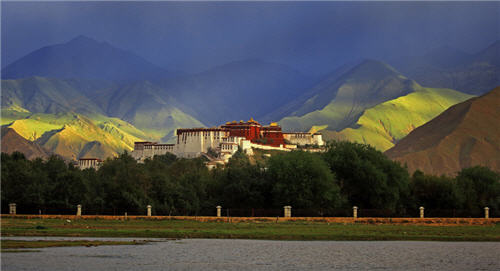 In general the Zang men wear plaits on the head and women wear them on the shoulders. They all wear gowns with long sleeves. When they are dancing, their sleeves look wings flapping in the air. The monks wear cassocks whose colors vary according to their particular sect of Tibetan Buddhism.

Usually the Zang people eat three meals a day, but during the busy harvest season they will have four, five and often more. Their staple foods are tsamba, yak butter tea, mutton, and beef. Tsamba, made of highland wheat is convenient to carry around and eat whenever you want, so you can see many of them carrying tsamba bags. As for drinks, they enjoy chang, a type of wine also made from highland wheat, and milk tea. The Tibetan knife, sharp and delicate, is often used to cut meat. 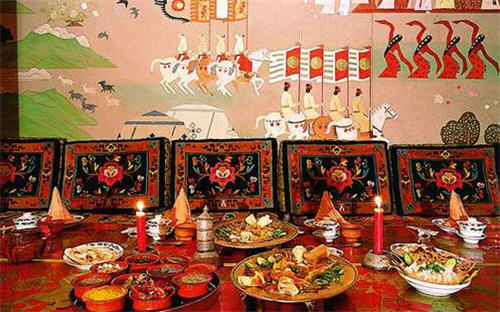 The most important festival is the first day of the Tibetan New Year. They clean their rooms in preparation for that day, paint symbols of auspice, and warmly greet each other in the morning. On the fifteenth day, they attend the Butter Lamp Festival. Another festival, the Saka Dawa Festival falls on the fifteenth day of the fourth month, and celebrates the birth of Sakyamuni and the arrival of Princess Wencheng. This festival involves a wide range of activities. On the Shoton Festival, the first day of the seventh Tibetan month, they take pots and wares to enjoy tea, yogurt and yak butter tea in a scenic place. The Great Prayer Festival and The Bathing Festival are also important festivals. If you are a guest in Tibet, the Zang people may give you a gift of a hada, a kind of white ribbon, which represents their warmest heart. 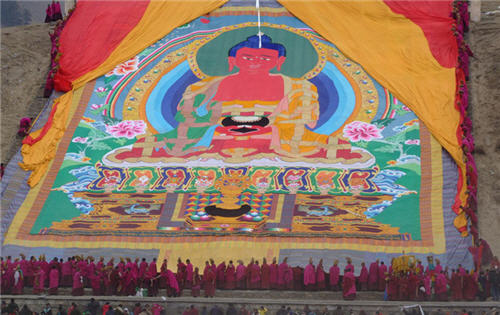