The Yao ethnic minority is a typical nationality living in the mountainous regions of the southern part of China. They are divided into several branches, such as Baiku Yao (people who wear white trousers), Hong Yao (people who favor red clothes), and so on.

Their language belongs to the Miao-Yao sub-group of the Sino-Tibetan language family. Most people speak the Yao language. Their language differs so much between regions that people from different areas have difficulty communicating with each other. Nv Shu, a special written language in South China used only by women, is used as the written language. 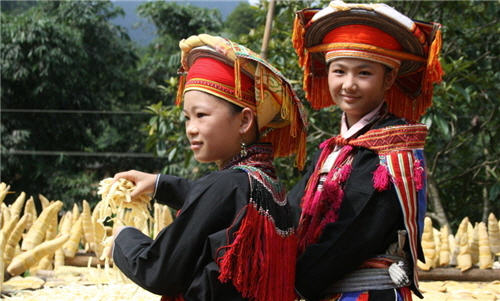 People living in different regions have differing beliefs. Some of them worship nature, some idolize their ancestors, and some adore the totem. Taoism also plays an important role in their lives, which includes the following of sacrificial ceremonies. Some people believe in wizardry.

They are master at handicrafts. These crafts not only come in many variations, but also have special meanings. The ones they are most proud of are batik, sculpture, painting, and printing and dying. Clothes differ according to the regions where they live. However, their clothes are mainly made of blue cloth with various pictorial designs on the fabric. Men wear short shirts without collars, and trousers or pants with the lower part wrapped. Women wear trousers, short skirts or pleated skirts decorated with unique embroidery. Also their special hair adornments are dazzling and attractive. 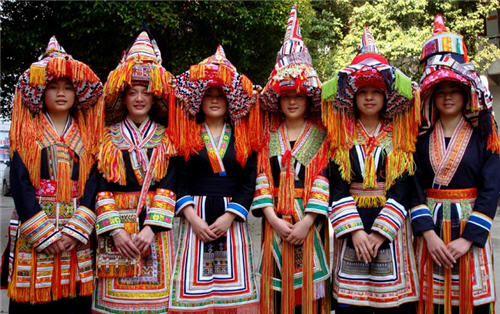 They hold many festivals, with at least one a month. Among the grand festivals, Panwang festival and Danu festival are the ones most worth mentioning. Panwang festival is held either every year, or every three to five years to express their reverence for their earliest known ancestor, Panwang. During this festival, everyone dresses themselves in their finest clothing and festively sings and dances to heart's content. Danu festival is held especially for the Yao people living in Guangxi Province to commemorate their grandmothers. The Zhuang people nearby also celebrate this festival by brewing fragrant wines and sing the melodious songs along with playing a timbal beating game. 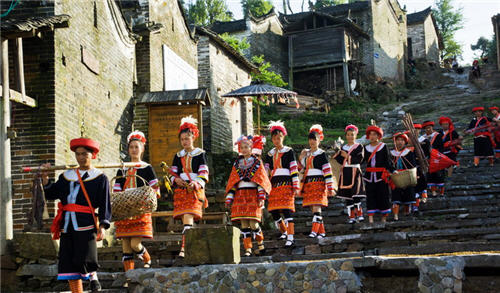 Other culture and arts are also worth appreciating, such as the ballads and legends with rich content and multiple styles that depict the nation's history, glorify the hard revolutions, or express their sweet love, with their distinctive music and songs as tambourine dance and timbal dance.

The moralities of diligence, faithfulness, hospitality, and braveness have been handed down from generation to generation, and have become their representative characteristics. 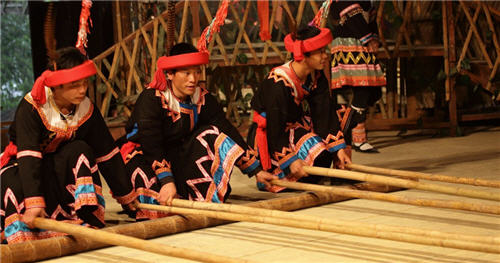