Shanxi has a recorded history of more than 2000 years in making wheat-flour food, due to bumper wheat harvest and rich cultivation experience, thus Shanxi ranks first in flour foods in China. Shanxi province boasts nearly 1,000 kinds of flour foods made with a wide variety of materials.

Located on the inland plateau, Shanxi is rich in wheat and cereal produce. Shanxi cooks are adept at making flour food, and they are able to utilize a single pile of dough into hundreds of varieties of noodles. In other Chinese cuisine families, cooked dishes are always served before staple foods like noodles. However, in Shanxi Cuisine, cooked dishes are served simultaneously along with staple foods.

Besides served as staple food, flour in Shanxi can also serves as snack and even art. A great variety of flour-based dishes are served, such as Shanxi shaved noodles in minced meat soup (Daoxiao Mian), steamed highland barley cakes (Mao Erduo), boiled dough sticks with sauce (Ti Jian) and fish-shaped noodles made with scissors (Jiandao Mian), all of which demand their own unique eating style, but all of them are soft, savory, elastic and appetizing.

What truly separates Shanxi noodles from other noodles is how that dough is formed into actual noodles. You can pull, tear, cut, roll and shave the dough into all kinds of shapes and sizes of noodle. Although all the noodles from Shanxi taste the same, they all feel different. The most popular noodle in Shanxi is shaved noodles, also known as Dao Xiaomian.

Dao Xiaomian: shaved noodles, shaved from a giant block of dough which is mounted on the equivalent of a washboard and hoisted over the shoulder, with noodles always shaved off directly into the boiling water

La Mian: Like all hand pulled noodles, these are a wonder to watch as 5 to 10 pounds of flour is kneaded, stretched and pulled into delicate even strands.

Mao Erdou: Cat-eared pasta, which can be paired with sauces but tastes best sautéed with cabbage with soy and vinegar.

Jian Daomian: Noodles are cut with an enormous pair of scissors as the giant spool shaped dough is rotated.

Jiu Pianer: Just grab a long coil of dough, and start pinching bits off into the water; best done at great distances from the boiling water, so you can pitch them across the room. 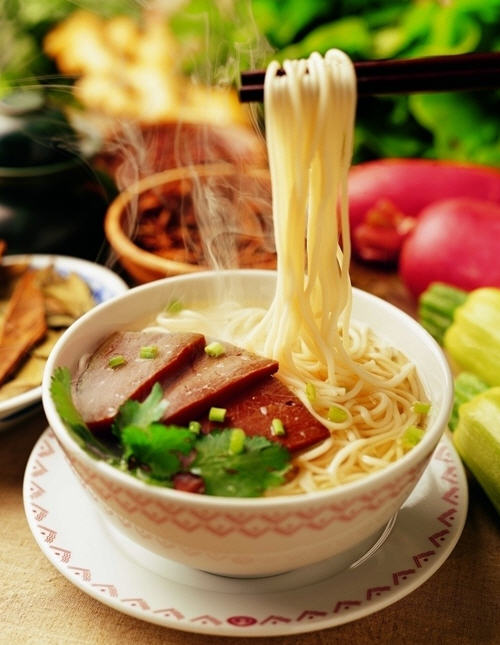 Making shaved noodles is as much a feast for your eyes as they are for your mouth. There is a phrase that describes the noodle-making process: "One noodle in the boiling water, one flying in the air, and one just being cut." An experienced chef can work very quickly, shaving off noodles that are 6 inches long at a rate of 200 per minute. The chef stands in front of a big pot of boiling water, with a piece of noodle dough about the size of a thick bamboo trunk in one hand and a special shaving knife in the other. He shaves off slips of the dough, which drop right into the boiling water.

Shaved noodles are usually served in Shanxi bowl-of-noodles style. Noodles are mixed with fresh vegetables, such as cucumber, leek, mung bean sprouts, and soybean sprouts, in a mild meat-based broth with a touch of Shanxi vinegar. It will be a treat to your taste bud and your eyes. 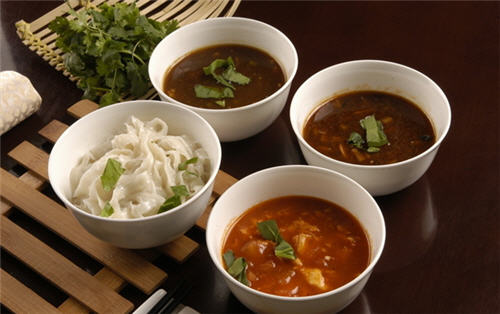