Uyghur, Singing and Dancing in Xijiang

The Uygur Ethnic Group is one of the 56 ethnic groups officially recognized by the People's Republic of China. Owning a population of about 8.39 million, most of the Uygur live in the Xinjiang Uygur Autonomous Regions. The language spoken by Uygur belongs to the Turkic group of the Altaic phylum.

Uygur love to eat sweet jam, pancakes, dumplings, noodles, and melon. They are the largest grape producer in China cultivating all kinds of grapes in the Turpan Basin. Besides, Uygur also plant other crops including rice, corn, grain, and cotton.

Traditional Uygur costume is usually made of cotton. Men usually wear robes with a long scarf around the waist while women like to wear accessories including necklaces, earrings, bracelets, and caps decorated with special ornament including colorful embroidery and pictures. Another interesting habit about Uygur is that they never go outside without wearing a cap.

The Corban Festival which falls on the tenth day of the second month in the Islamic year is second to none for Uygur people. During the Festival they hold the biggest worship ceremony of the year. In the morning of the festival Uygur people wake up early and go to the local mosques for the worship. They could not eat for half of the day on the Corban Festival. 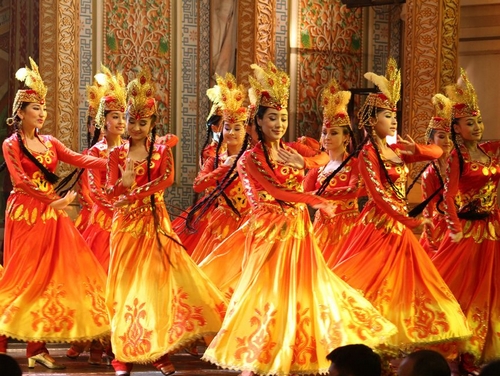 Uygur people feathers as hospitable, kind, and united. People who live in the same community are used to help each other and always share a big part of the food and money with poorer members in the community.