Torch Festival, the Carnival of the Orient

Torch Festival is a traditional grand festival among some ethnic groups, such as the Yi, Bai, Hani, Lisu, Naxi, Pumi and Lahu in southwestern China. It usually falls in early June of the lunar calendar or on the 24th or 25th of the month, with three days of celebrations. The festival features lighting up torches, hence its name.

The origin of the festival may have something to do with the worship of fire by ancestors. They believed fire had the power to repel insects, drive away evils and protect crop growth. For some ethnic groups, it is a tradition in the festival for elders to share farming experience with young people.

In the Torch Festival, every family needs to light a torch and hold the torch to illuminate the corners in the room and walk around the fields. Some villagers even have torch parade so as to drive away all bad lucks and pray for a harvest. The custom of holding a torch to shed light on tree and field was found in Han people in Southern Song Dynasty. In Ming and Qing Dynasties, people in east China’s Zhejiang and Jiangsu Provinces had the custom as well. The most attractive activity is the Bonfire Party. People play music instruments like yusheng, yueqin and sanxian (three stringed plucked instrument), singing and dancing for a whole night. 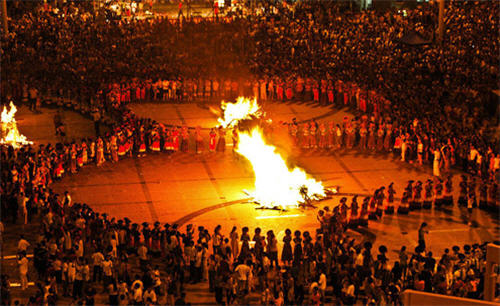 During the festival, big torches tied up with dried pine wood, lightwood are erected in all villages, with small torches placed in front of the door of each household. When night falls, the torches are lit and the villages are as bright as daytime. Inside the villages, young men and women are singing and dancing around the big torches that keep burning throughout the night. Other activities like song and dance parties, horse races, bullfights, arrow shooting, wrestling, tug-of-war and swinging are also held during the festival. And there are trade fairs going on. In some areas, various religious rituals are performed to pray for a harvest.

In a horse race of the Yi people in Yunnan, torches are used to form multiple hurdles for riders to get through; the Hani people in Yunnan traditionally attach various fruits to torches with strings. When the strings are broken after the torches are ignited, people scramble for the fruits for good luck; for the Lisu people in Sichuan, the festival is an occasion for holding grand torch parades. Big torches are carried by the procession, which is like a fire dragon. If several processions from different directions meet, it is a tradition to swap the big torches with one another.

Torch Festival shows the worship for fire of the ethnic groups. We can still get a glimpse of the value and culture through all the customs and activities in the festival. 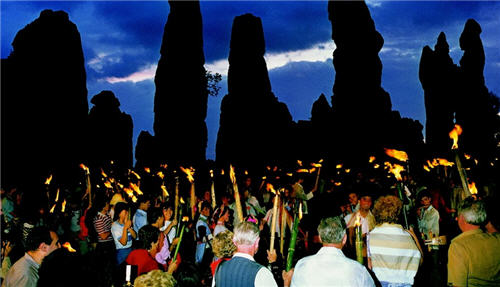