The styles of folk residences in China change from province to province. Among the various design, there are some that are representative of special places depending on geographical conditions or even ethnic groups.

In this collection, we select some of the most stunning folk residences in China.

Hutong is a unique kind of Beijing-style community where live those Beijing-born old citizens. Behind the walls are local people’s residences, named Siheyuan, which comprise several low buildings that are grouped around one or more central courtyards.

In a Siheyuan, the maim rooms face south; warm in winter and cool in summer, and is the living quarter of the household master. On its both sides there are one or two rooms of small size in depth and height, therefore nicknamed as ears of the main rooms, which are intended for younger generations. And the northernmost row of rooms in a quadrangle is called back house. 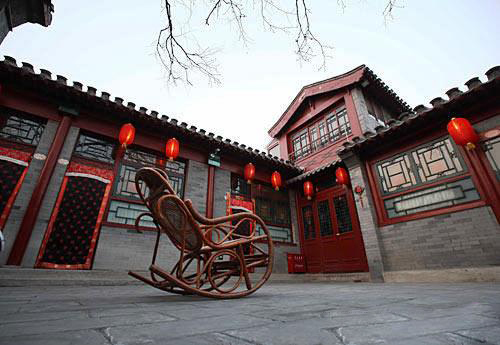 Cave dwellings are found all over Northern China along the Loess Plateau. It has been served as a kind of cave dwelling for a long history. Until now more than 40 million Northern Chinese people are living in such ancient and traditional architectures as their dwelling.

Having selected a good place, local people would dig a large pit and dig caves at the four sides, a tunnel leading to the ground at one side and a well in the center of the pit and build low walls at the four sides. The courtyard cave dwelling is warm in winter, cool in summer along with being both rain and fireproof. The pits of different families sit close to each other.

Tulou: a little kingdom for the family

Fujian Tulou, also called Hakka House, is the most extraordinary type of Chinese rural dwellings of in southwestern China. Housing a whole clan, the houses functioned as village units and were known as “a little kingdom for the family” or “bustling small city.” A Tulou is usually a large, enclosed and fortified earth building, rectangular or circular in configuration, with very thick load-bearing rammed earth walls. It is between three and five stories high and housing up to 80 families. Smaller interior buildings are often enclosed by these huge peripheral walls, which can contain halls, storehouses, wells and living areas, the whole structure resembling a small-fortified city. 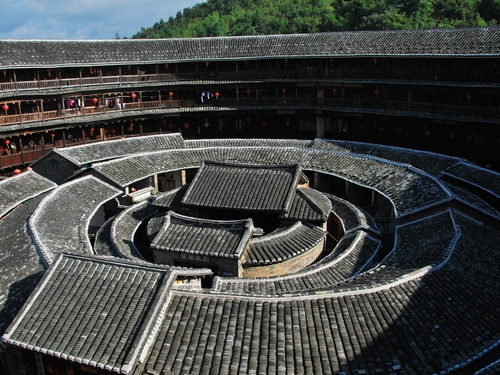 The Mongolian Yurt is a domed pealed tent. The frame of the yurt is a supporting ring, formed by some wooden poles. Every yurt has an opening on the top, which provides both light and ventilation, and a wooden door facing south or southeast.

The emergence of Mongolian yurts is closely related to their nomadic lifestyle. Mongolians always move about to seek new water sources and pastures and the Mongolian yurt can meet their requirements. Thus, yurts are designed to be easily taken down, made compact for carrying, and reassembled.

Built mainly at the end of the Qing Dynasty and in the beginning of the 20th century, Kaiping Diaolou and Villages were used to ward off ethnic warfare, village battles, wars, bandits and lawlessness troubles in this area of Guangdong Province. Kaiping County was considered a backwater, and the people built these buildings to be small fortresses and watch towers for protection. Overseas Chinese and Chinese returning with wealth that they acquired in other countries funded most of the buildings, which explains why the tall buildings have modern features and often include Western architectural styles. There are 1,833 existing Diaolou in 16 townships of Kaiping.

Bamboo buildings of Dai ethnic group are mainly distributed in the whole territory of Xishuangbanna, Yunnan province. It is a stilt style building that takes bamboo as the main construction material. The reason is that they mostly live in the river valleys that are characterized by low terrain and abundant rainfall. The stilt style building is conducive for avoiding insects, snakes and beasts; they are also damp-proof and well ventilated. As a result, Dai people take the local materials as the major form of folk houses.