Reputed as the living fossil of traditional Tibetan culture, Tibetan Opera boasts a history of more than 600 years, which is about 400 years longer than China's national treasure, the Peking Opera. The Tibetan people have long cherished this important folk art, which has become a source of identity for them. It is said that wherever you find Tibetan people, you will find Tibetan Opera.

There is a legend about the Tibetan Opera in its present form. During the 14th century, a high-ranking monk and bridge builder named Drupthok Thangthong Gyalpo decided to build iron bridges across all of the major rivers in Tibet to improve transportation and facilitate pilgrimages. To fund the project, Thangthong Gyalpo created a singing and dancing group of seven beauties who danced while he played the cymbals and drums. They performed throughout Tibet to earn money for his bridge project. This is believed to be the source of the present Tibetan Opera.

Thangthong Gyalpo is considered as the father of Tibetan Opera. To honor the great founding father, a blessing of his statue always ends with the presentation of the hada (a strip of raw silk or linen used for ritual greetings) by the performers and audience members. 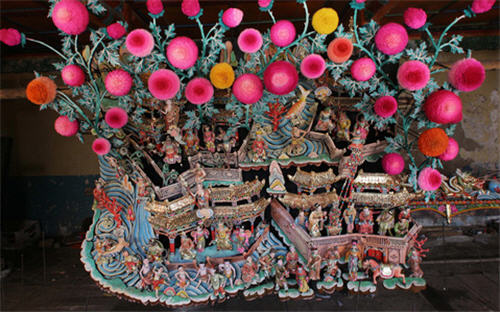 According to Tibetan historical records, when Princess Wencheng of the Tang Dynasty (618-907) was married to the Tibetan King Songtsan Gambo, she brought the costumes, music and dances of the Han people to Tibet, which were greatly admired by the king. In response, he had 16 beautiful girls trained in an art form combining the Han-style and Tibetan folk music and dancing to entertain the princess.

In the eighth century, the Tibetan King Khrisong Detsan became a follower of Buddhism under the influence of his mother, Princess Jincheng of the Tang Dynasty. He invited the Lotus-Born Monk from India to spread Buddhism throughout Tibet and built the Samye Monastery. At the inauguration ceremony, a pantomimic dance show based on the deity worship ritual of the Bon religion, a native religion of Tibet and Tibetan folk dances were staged.

During the reign of the fifth Dalai Lama in the 17th century, this performing art was separated from religious rituals and became an independent dramatic form. What started off as pantomime has evolved into a structured art of song, dance, chants and narration, accompanied by flamboyant masks. Story lines included the nation's history, ancient legends of heroes and Gods and satires on current events. The tradition was passed down from one generation to the next, developing into Tibetan opera, which was popularized throughout the region.

Over the centuries, the opera has formed a three-part stage process. In the prelude, known as "Wenbadun", Wenba men in blue masks, two men and several fairies take the stage to perform religious rituals and songs and dances, and introduce the actors and actresses. Then, a narrator explains the plot, section by section, as the opera is being performed, episode by episode. In the absence of a realistic setting and props, the narrator's words must conjure up the stage effects in the audience's imagination. Two musicians - a drummer and a cymbalist - sit on the side of the stage. A drumbeat, accompanied by a specific dance step, identifies each character. The performance ends with a blessing ritual that features a blessing ceremony and is also an occasion to present hada and donations from the audience members.

Costumes of Tibetan Opera are very lavish, with rich brocades and a variety of masks and animal motifs. The musical score is created entirely by the drum and cymbals that punctuate every movement. The rapidly chanted narration alternates with the sung dialogues repeated in the chorus. The dance movements are refined, exaggerated and vigorous.

Tibetan Opera call for skills in singing, dancing, elocution and martial arts. Historical pageantry, myth and magic are integrated together with earthly humor and scenes from the daily lives of ordinary people. The primitive simplicity and vigor demonstrated in the singing and dancing is effectively reflected in the typical Tibetan landscape backdrops.

The highlight of Tibetan Opera is the mask. Located on the front of the mask is usually a motif, such as the sun or the moon. The role of the actor can be identified from the type of mask. For example, a red mask represents the king; a green, the queen; a yellow, Lamas and deities, etc.

Today, there have been some changes in the structure, singing, dancing, masks and stage format of Tibetan Opera. An orchestra, backdrop, lighting and make-up have been added. Tibetan opera is now also performed both indoors and in the open air. 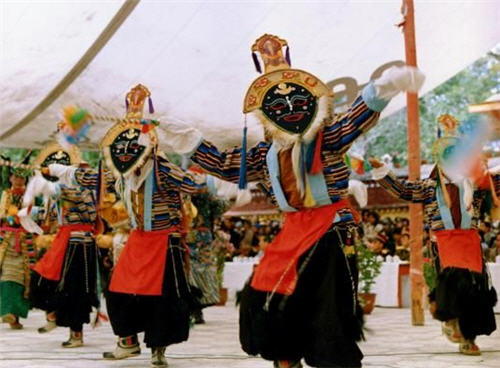 Today, Tibetan Opera has four schools: the Goinba School, the Gyanggar School, the Xangba School and the Gyormolung School, each with their own characteristics.

Originated in Ngamring and Lhaze counties, the Goinba School features high-pitched and sonorous singing, mixed with songs and dances from the Doi area, and traditional acrobatics; the Gyanggar School characterized by an ancient, rugged and solemn style derived from Lamaism, is popular in Rinbung, Gyangze and Xigaze; the Xangba School from western Tibet combines the influence of local folklore and the Gyanggar School; as the most recent school to be established, the Gyormolung School from the Shannan and Lhasa areas specializes in singing, choreography, stunts and comic effects. It is the most developed among the four schools and has formed a jubilant style with rich and colorful songs and dances.

Tibetan Opera reflects the Tibetan people's lives from various periods. The original scripts from which the opera was adapted have remained popular readings among Tibetans for centuries. Currently there are about 20 traditional repertoires (although some of the scripts have been lost and only the names and some of the plots remain). The famous Eight Great Classical Tibetan Operas include Prince Nor-bzang, Maiden Vgro-ba-bzang-mo, Brothers Don-yod and Don-grub, Prince Dri-med-Kun-idan, Princess Wencheng, Gzugs-kyi-nyi-ma, Pad-ma-vod-vbaand Maiden Shang-sa, most of which were derived from historic events, famous lives, folk tales and stories from the sutras. 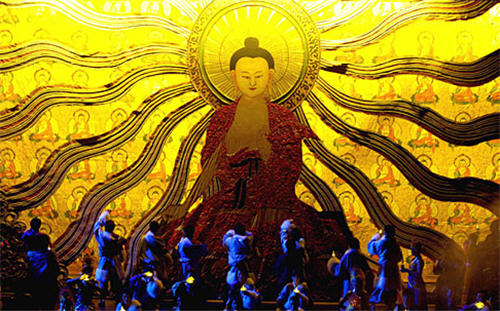 Featuring prominently in a number of Tibetan festivals and temple fairs, Tibetan Opera has played a central role in the life of the Tibetan people throughout the ages. By the 19th century most districts in Tibet had their own opera troupes. It spread from Shannan, Xigaze and Lhasa to other parts of Tibet, and further into southwest China's Sichuan and Yunnan provinces, northwest China's Qinghai and Gansu provinces, as well as into neighboring India, Bhutan and Nepal.

However, Tibetan Opera was once on the verge of fading away in the 20th century like other traditional folk art, because of the passing away of elder artists and a drain in the reserves of traditional works as well as excellent performers. Most original audio and video materials of Tibetan Opera were lost, including some of the Eight Classics.

To preserve the threatened unique Tibetan art, a nationwide rescue program was launched. It was fortunate that the legendary Tibetan Opera with strong Tibetan characteristics has been preserved in an intact way throughout history. The government of China's Tibetan Autonomous Region is busy preparing for Tibetan Opera to be listed as a Masterpiece of Oral and Intangible Heritage of Humanity by the UNESCO.

As the oldest opera with a history of over 1,000 years, the UNESCO has proclaimed Kunqu Opera the Masterpiece of Oral and Intangible Heritage of Humanity in 2001. However, no ethnic art tradition has been honored since then. Today, Tibetan Opera is also becoming increasingly recognized in other parts of China and beyond, and is regarded as a treasure of Chinese ethnic art.