The Village of Longest Hair in Guangxi Province

In the deep mountain of Guangxi Province, there live a group of women, they wear traditional costume with beautiful ornaments; they are gifted to be outgoing and optimistic; and when they laugh people seem to hear silver bell ring. These women are called “Hongyao”, who gave the Huangluoyao Village the reputation of “the village of longest hair”. The place they live is called Huangluoyao Village, belonged to the of Longsheng Gezu Autonomous County in Guangxi Northern Mountain Area.

Huangluoyao Village is located inside the Longji Scenic Area, about 100km away from Guilin. It is reachable by coach buses running between Guilin and Longsheng or coaches departing from Guilin railway station to Jinkeng Terrace. The village lies in the foot of Pingan Terrace; it is the only Yao ethnic dwelling among the Longji thirty villages. 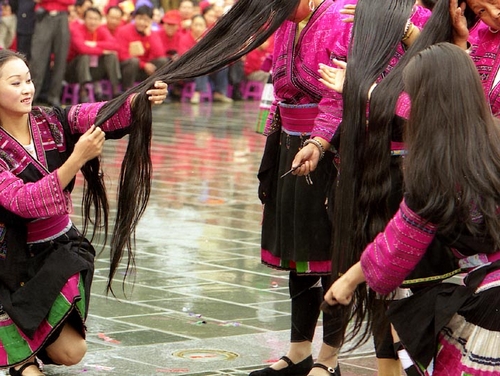 In Huangluoyao Village, there live about 60 Hongyao families. About more than 80 Hongyao women out of 120 keep their hair longer than 1.4 meters, with the longest hair as long as 1.8 meter. The group has been listed by Guinness World Record as the “longest hair group”. Each Hongyao woman has three tufts of hair, except for the first tuft grown on the head, they keep the second tuft cut at their eighteenth and the third tuft collected daily when they do up their hair. The three tuft of hair must be bound in the head every day.

Hongyaos are blessed to have bushy and luxuriant hair, as long as the beautiful face is covered by wrinkles, the black and flowing hair never change. For Hongyaos, hair is as important as their life. Normally Hongyao women’s hairstyle could only be seen by their husband, so unmarried girls always cover their hair using a piece of black cloth until they get married. After giving birth to a baby, they would add a small topknot on the head representing having a child, so by seeing their hair, people could know whether this woman is married and how many child she has. 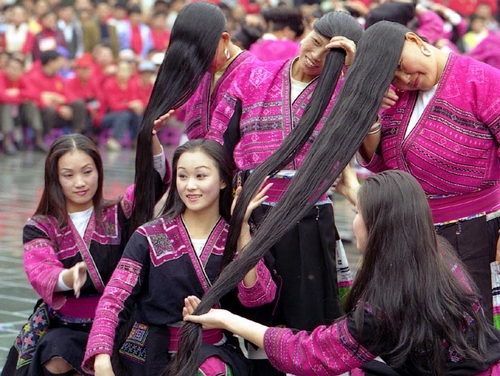 For Hongyao, Long hair stands for long life, wealth prosperous and auspicious. From about twelve they start to keep their hair long, if hair grows too long they cut a part from the bottom and keep them. Hongyao’s hair features black. White hair is seldom found even they get old, the secret lies in the wooden comb and special shampoo made of herbal and water used to wash rice.