The Chinese abacus, called Suanpan in Chinese, is an ancient calculating method with a history of over 2,500 years. Suanpan has two decks and more than seven rods. The upper deck, which is known as heaven, has two beads on each rod. These beads each have the value of five. There are five beads on the bottom deck, known as earth. Each of these has the value of one. The beads are moved up and down during calculation.

The Chinese abacus was officially listed as an intangible cultural heritage at the 8th Annual UNESCO World Heritage Congress in Baku, Azerbaijan. Traced back to the Spring and Autumn Period (770-476BC), Suanpan is regarded as the fifth great invention in Chinese history.

There are countless evidences showing Suanpan’s long history. For example, in the famous long scroll Along the River During Qingming Festival painted by Zhang Zeduan (1085-1145) during the Song Dynasty (960-1279), a 15 column Suanpan is clearly seen lying beside an account book and doctor's prescriptions on the counter of an apothecary.

Although the long history of Suanpan is confirmed by the world, people are still wondering about its origin. The similarity of the Roman abacus to the Chinese one suggests that one could have inspired the other, as there is some evidence of a trade relationship between the Roman Empire and China. However, no direct connection can be demonstrated, and the similarity of the abacus may be coincidental, both ultimately arising from counting with five fingers per hand. Where the Roman model and Chinese model (like most modern Japanese) has 4 plus 1 bead per decimal place, the modern version of the Chinese Suanpan has 5 plus 2, allowing less challenging arithmetic algorithms, and also allowing use with a hexadecimal numeral system. Instead of running on wires as in the Chinese and Japanese models, the beads of Roman model run in grooves, presumably making arithmetic calculations much slower. 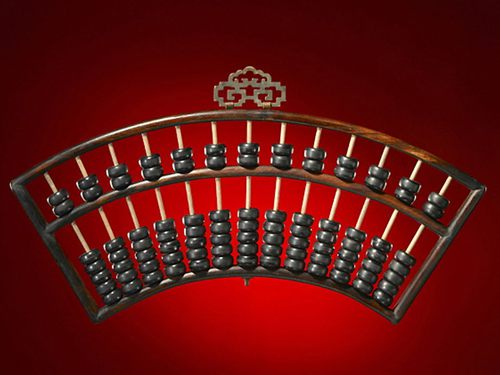 Another possible source of the Suanpan is Chinese counting rods, which operated with a decimal system but lacked the concept of a zero as a place holder. The zero was probably introduced to the Chinese in the Tang Dynasty (618-907) when travel in the Indian Ocean and the Middle East would have provided direct contact with India and Islam and allowed them to acquire the concept of zero.

The abacus’s popularity has been compromised over the course of time by the emergence of digital calculators; however, they are still in use in many of China’s rural marketplaces. Today, the abacus has a richer value as a cultural symbol rather than a practical calculating tool in China.