Snuff bottle is originally a kind of container used for storing snuff. Now, as nobody takes snuff any more, they have become simply a kind of exquisite craft made of crystal or glass (and, more rarely, other materials such as agate or hair crystal). Different from common bottles, snuff bottle is painted on the inside using a narrow sliver of bamboo or brush.

Dating back to the history, the popularity of snuff and the snuff bottle was firmly established by the end of the 17th century in Beijing. Coming to the early and middle 18th century, when the use of snuff became a social ritual of the upper class, the snuff became more and more popular in the society. These containers, upon which so much art, refinement and money had been expended, became the subject of avid acquisition.

Spreading slowly and gradually to the rest of the country, snuff-taking had become a nationwide habit among all social classes by the end of the 18th century. It was courtesy to offer friends a pinch of snuff upon meeting them in the street or at home. Owning the most unusual or finest bottle is a symbol of social status.

Made in every material known to the Chinese—glass, porcelain, jade and other hard stones, ivory, coral, lacquer, amber, wood, etc—the snuff bottle was produced in enormous quantities and of varying quality to supply the increased demand. During the Qing Dynasty, Chinese snuff bottles were at the heart of a fashion that had no equivalent because of the extraordinary variety of styles, techniques and materials found in these small objects. These masterpieces were once the most important manifestations of the applied arts. 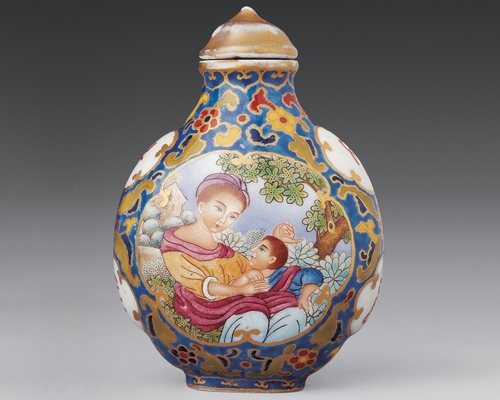 Until the late Qing Dynasty, with the revolution and the establishment of the Republic China in 1912, the fashion of taking snuff died away, as a consequence the popularity of snuff and the snuff bottle rose and fell. Today, however, as the art and history reflected in these small bottles remains, more and more people in the modern society start to get interested in collecting these small, exquisite objects.