Most Sichuan Opera repertoires are adapted from the Chinese classical novels, mythologies, legends, and folk tales. The performances are always full of wit, humor, lively dialogues, and local flavors. To portray special characters, the opera integrates a series of stunts, including the famous face-changing skill. In other Chinese operas, facial makeup is usually painted, but in Sichuan Opera, the performer can change his or her facial makeup in the snap of a finger right on stage. 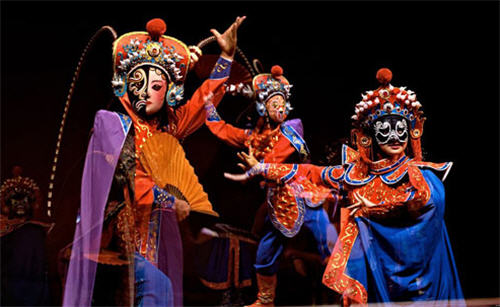 Sichuan Opera is renowned for its high-pitched tunes, accompanied only by percussion instruments and choruses, without wind or stringed instruments. In addition, this spectacular theatrical presentation features bright sets and costumes, plus a combination of music, dance, and acrobatics. One that distinguishes Sichuan Opera from other theatrical traditions is its immense vitality and dynamic performances that always strive to bring out an individual's artistic abilities into play to ensure fresh material, variety and creativity.

The development of Sichuan Opera is linked to the natural conditions in Sichuan. The principal agricultural products cultivated in Sichuan's fertile soil include rice, tea, and mulberry trees. Rustic songs originally sung by boatmen and tea-plantation and rice-paddy workers developed into famous local folk songs, which can be regarded as the precursors of the province's great operatic tradition.

One of the most fascinating, artistic charms of Sichuan Opera is face-changing, which is achieved by quickly tearing off, rubbing or blowing away a mask to reveal another. The face-changing skill is used in the opera to show the emotional changes of the characters. The performer prepares many special masks in advance made of gauze and elastic materials. After the masks are painted with different designs and assembled with a special transparent thread, they are pasted onto the performer's face. The special masks for changing faces must be made to fit the performer's face to ensure that they are pasted as close as possible to the skin. 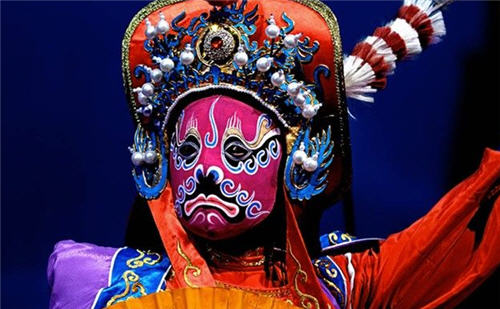 Sichuan Opera combines five different sonic systems, which are gaoqiang, huqin, dengdiao, tanxi, and kunqu. A single theater piece of Sichuan Opera usually combines two or three of the musical styles. Only very rarely do all five systems appear together. The gao qiang style is the most frequent and its structure is most clearly developed.

The best-known style with most distinct characteristics of southwestern China is called gaoqiang, which is distinguished by solos that are usually accompanied by sparse rhythmical accentuations played with wooden clappers. This highly ornamental vocal style is distinguished by brilliantly artful glissando links, skillfully implemented vibrato embellishments around a single tone in the form of a delicately elegant yet energetically melodic ornamentation. The simplicity of the folk songs' melodic structures is often retained. The barbarian fiddle, or huqin, was probably brought to Sichuan by the famous Peking Opera, where shrill-stringed are instruments are predominant. Dengdiao is evolved from exorcist ceremonies practiced in the villages of Sichuan. Deng diao was only accepted very gradually and with much hesitation from professional performance troupes. Itinerant troupes from northern China probably brought the clapper element named tanxi, to Sichuan. This style is characterized by cunning, emotionally fraught rhythms played on wooden clappers. Kunqu is originated in the southern Yangtze Basin and was later imported to Sichuan as a variant of the traditional and respected Kunqu Opera, with its discriminating literary dramas and fluent, highly artful melodies.