As a relatively new local Chinese opera, Shaoxing Opera is popular in the southern regions of the Yangtze River. Shaoxing Opera was originated in Shaoxing region of northeastern Zhejiang Province, which belonged to the Yue State in ancient times, thus it was popularly known as Yue Opera or Yueju.

Origin and Characteristics of Shaoxing Opera

With a history of 800 years, Shaoxing Opera was derived from a kind of story-singing. At first, it was performed with a small drum and hardwood clappers for rhythm. Later, choral and orchestral accompaniment was added. It drew some musical elements from other operas and subsequently formed its own characteristics.

Singing is a dominant part of Shaoxing Opera, thus it is noted for the lyricism of the melodies. The tunes are sweet and beautiful while the performance is vivid and full of local flavor. As the opera has grown, its basis in reality and everyday life as well as the use of colloquial language has remained strong.

Originally Shaoxing opera was only performed by males and then changed to all female performances. Gradually male and females work together. The texts of Shaoxing opera are based on romantic love stories, while acrobatics or fighting scenes are not included. In Shaoxing opera, stage properties and light effects are used and the costumes imitate the light-colored clothes, fashionable at the beginning of this century in China.

The most well known plays performed in Shaoxing style are "Butterfly Lovers", which is a kind of Chinese version of "Romeo and Juliet", and the love dramas "A Dream of Red Mansions" and "The Romance of the West Chamber ". 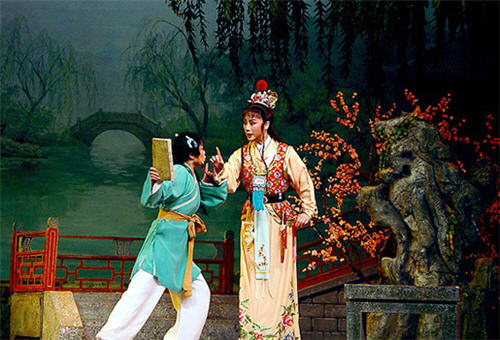 Butterfly Lovers is known as Liang Shanbo and Zhu Yingtai in Chinese. It is a romantic but sad love story. A woman disguised as a man goes to Hangzhou to study. On the way, she meets Liang Shanbo and they become sworn "brothers". Years of study has nurtured the love of Zhu for Liang. When they have to part after three years in school, Zhu hints that she is a woman but Liang does not understand. Later, when Liang learns the truth and hurries to Zhu's family to propose, he finds Zhu's father has married her to Ma Wencai, the son of the county magistrate. With grief and indignation, Liang dies of illness. As Zhu stands crying in front of Liang's tomb, it opens, Zhu jumps into it, and then the two lovers turn into a pair of free-flying butterflies. 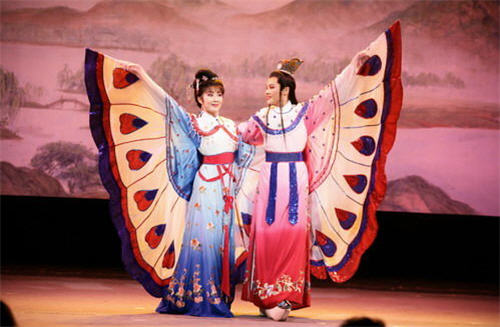 Dream of Red Mansions is Honglou Meng in Chinese. Adapted from Cao Xueqin's novel of the same title, the opera focuses on the tragic romance between Jia Baoyu and Lin Daiyu and praises their rebellious spirit. The opera starts with Lin's arrival at the Jia family and covers the original major plots such as: Jia and Lin read the banned book "West Chamber"; Lin buried the fallen peach flowers; Lin burns her love poems before her death; and Jia leaves home and becomes a monk after Lin dies. 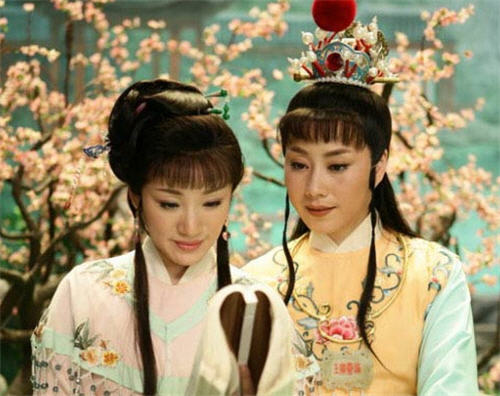 Peacock Flying to the Southeast is Kongque Dongnan Fei in Chinese. This play is adapted from a Han folk song of the same time. In the late Han dynasty, Jiao Zhongqing, an official, and his wife, Liu Lanzhi, are deeply in love with each other. But Jiao's mother refuses to accept her daughter-in-law and sets a situation in which he reluctantly rejects his wife. The two promise never to remarry. Resolved not to betray Zhongqing, Lanzhi drowns herself in a river. When Zhongqing learns of this, he hangs himself. 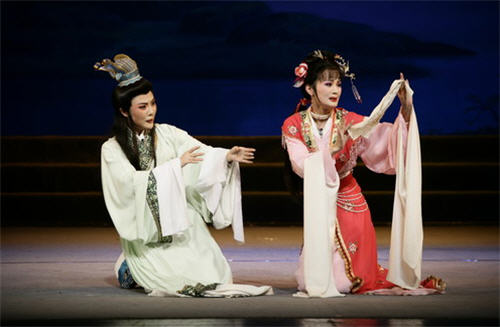