With a 200-year-long history, the Peking Opera is regarded as China's national opera which owns its fascinating music, singing and costumes. Peking Opera’s main melodies originated from Xipi and Erhuang in Anhui and Hubei respectively and, over time, techniques from many other local operas were incorporated. It is believed that Peking Opera gradually came into being after 1790 when the famous four Anhui opera troupes came to Beijing. Peking Opera underwent fast development during the reign of Emperor Qianlong and the notorious Empress Dowager Cixi under the imperial patron, eventually becoming more accessible to the common people.

In ancient times, Peking Opera was performed mostly on stage in the open air, teahouses or temple courtyards. Since the orchestra played loudly, the performers developed a piercing style of song that could be heard by everyone. The costumes were a garish collection of sharply contrasting colors to stand out on the dim stage illuminated only by oil lamps. Peking Opera is a harmonious combination of the Grand Opera, ballet and acrobatics, consisting of dance, dialogue, monologues, martial arts and mime. 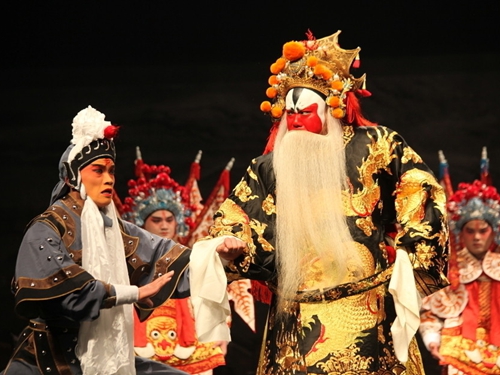 The Peking Opera band mainly consists of an orchestra and percussion band. The former frequently accompanies peaceful scenes while the latter provides the right atmosphere for battle scenes. The commonly used percussion instruments include castanets, drums, bells and cymbals. One person usually plays the castanets and drums simultaneously, which conduct the entire band. The orchestral instruments include the Erhu, Huqin, Yueqin, Sheng (reed pipe), Pipa (lute) and other instruments. The band usually sits on the left side of the stage.

Full of Chinese cultural elements, the opera presents the audience with an encyclopedia of Chinese culture, as well as unfolding stories, beautiful paintings, exquisite costumes, graceful gestures and martial arts. If you are interested in Chinese traditional art and performance, never hesitate to take a chance to enjoy an authentic Peking Opera performance in China.