Nadam means entertainment or recreation in Mongolian. The fair was originated in the early days of the 13th century and is a traditional Mongolian festival. In the past many activities were taken on during the meeting, such as making laws and regulations, appointing and removing officials, giving awards and penalties, and the large Nadam Fair.

Nowadays, Nadam is always held in summer (usually July or August) when the grasslands are beautiful and flocks and herds are ready for tallow. It often lasts for three to seven days. During this time, herdsman will come from all over the area in completely new national costumes, riding their horses, carrying yurt, and all kinds of meat and milk products on their light wooden carts. While putting up the yurt, people begin to simmer tea and stew meat.

Since its birth, the 'three skills' -- wrestling, horse-racing, archery - have been a necessary part of the Nadam activities. In the past, winners of the three sports would be given horses, camels, sheep, brick tea, and silk as prizes. In modern times, more activities have been added, such as polo, horsemanship, track and field, and other ball competitions. Nadam held in Xilin Gol League is the biggest and has become an important activity for the health and entertainment of the masses.

Mongolian wrestling is different from traditional Chinese wrestling. It is distinguished from other forms by its rules, methods, uniforms and fields. There is no weight or age based groups, nor fixed numbers, as long as the numbers are even numbers such as two, four, six, eight, sixteen, thirty-two, sixty-four or one hundred and twenty-eight. All wrestlers are matched by drawing straws or by respected judges. The game uses single- elimination rules in that victory or defeat is determined once. 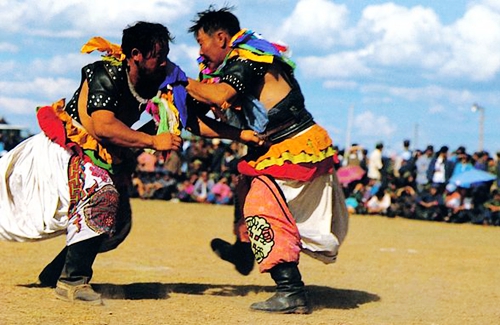 Horse racing of Mongolia can generally be divided into three parts: running, walking and galloping. In walking horse racing, horses are competing for speed, resistance, steadiness and beauty while the horse runs in side steps, alternating between the front and rear hooves. The racehorses are generally over five years old and the riders are always adults. The race requires the rider to be able to hold his horse at a walk, as fast as possible, without breaking into a run.

There are two types of archery; shooting arrows when standing still, or when riding a horse. There are no restrictions on the arrow's pattern, weight or length. Generally, each participant has nine arrows to shoot in three turns. The distance from the target to the archer depends on conditions, but is usually in a fixed place throughout a single competition.