Mencius, a Sage of Confucianism 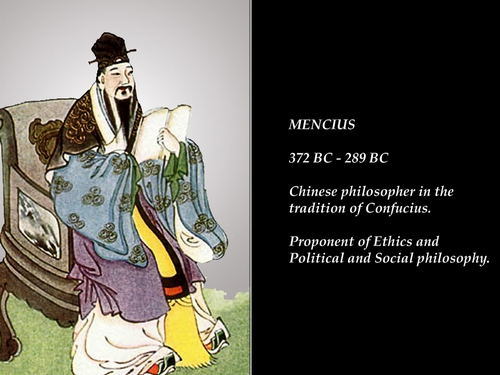 Mencius inherited Confucius' theory about kindness and he added a new concept of dutifulness. He was even more insistent than Confucius that morality and the sense of duty makes a true ruler. Mencius advocated a famous saying about the importance of people. That is the people rank the highest, the land comes next and the ruler counts the least. According to Mencius, a governor exists for the sake of giving his people peace and wealth. If a ruler neglects his responsibility to the people, or even misuses his power and oppresses the people, he could be overthrown by the people.

Mencius believed that people are born to be virtuous and each individual in the society could play a role as a sage. According to his philosophy, human’s inclination to goodness is just like their natural to drink water. All the crime and sins are due to the distortion of human nature and the falling away of their instincts. Once the individual retrieves their kind distinct the evils could be forgiven. This is the core of Mencius’ doctrine, as well as the orthodoxy of the Confucianism.

Mencius left a famous dispute about human nature related to a famous Chinese old saying telling appetites for food and sex are human nature. Mencius refutes the view, his renowned statement is although the desires constitute the greatest part of human nature, a slight difference between man and the beast is whether they could handle the desire. To be simple, the difference sets man apart from animals is self control.