Lord Rabbit figurine was once used for worship on the Mid-Autumn Day, now it is mostly used as a type of decoration and considered a unique symbol of Beijing local culture. With powerful poses, Lord Rabbit figurines are famous for the classic looks and spectacular designs. In the local shops of Beijing, they are one of the most popular products.

Appearing in a warrior’s armor with banners on the back, and riding on a ferocious animal, Lord Rabbit always has a calm, serious expression that makes an interesting contrast to its long, funny-looking ears. There are also many designs that depict Lord Rabbit as a Beijinger with a special profession. 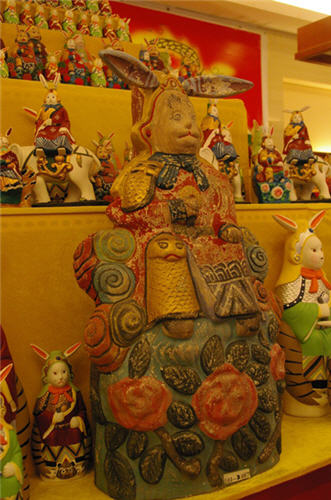 There are many legends about the origin of Lord Rabbit. According to the most popular version, Lord Rabbit was a maker of elixirs. It was once sent by the Chinese moon goddess named Chang’e to Beijing to save people from a deadly plague. In Beijing, it transformed into a young woman and visited every corner of the city to give people medicine. The plague quickly subsided, and people were grateful and competed to give her gifts to express their thanks. When the plague was driven away, she returned to the Moon. To commemorate her, Beijingers started to create and worship clay rabbit figurines on every Mid-Autumn Festival.

It is generally believed that Lord Rabbit first appeared in the late Ming dynasty. According to historical record, Beijingers from that period had a tradition of making clay rabbits for worship. During the Qing dynasty, Lord Rabbit was used not only as a shrine, but a toy for children. Nowadays, in the hands of the modern artists, Lord Rabbit can adopt any shape and be decorated with any design.

In Beijing's local culture, Lord Rabbit is a symbol of happiness and good luck. Even though it was born out of an ancient Chinese tradition of worshiping Jade Rabbit on Mid-Autumn Festival, it has a unique Beijing feel that has no equivalent in any other places in China.