Lacquer Thread Sculpture is a traditional folk handicraft in southeast China which uses well-tempered lacquer threads to build decorative patterns. It is especially popular in Xiamen and Quanzhou in Fujian Province. Originated in the mid-17th century, lacquer thread sculpting is listed as one of China's national intangible heritages in 2006. 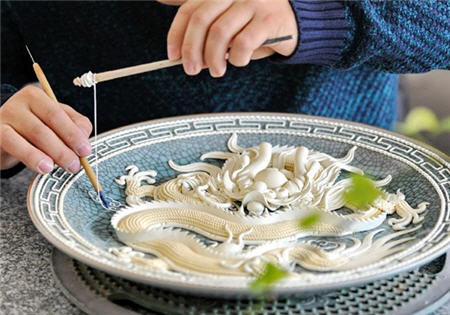 This delicate craft derived from decorations on Buddhist statues and evolved into an independent art form some 300 years ago. In the Tang Dynasty (618-907), the prevalence of Buddhism stimulated the craftsmanship for religious statues, which were lavishly decorated with colorful painting of varied kinds. During the Song (960-1279) and the Yuan dynasties (1279-1368), sculptors began to use lacquer threads to outline patterns on the clothing and headwear of the figures they created, giving their works a three-dimensional aspect. It was not until the Qing Dynasty (1644-1911) that lacquer thread sculpture came into its heyday. The making required months of hard work, and up-scale products were often coated with pure gold. These artworks were especially valuable and so were well-received among the upper class as symbols of wealth and high social status. 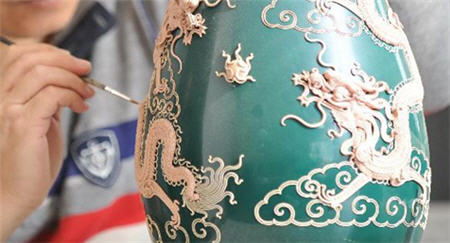 The handicraft is the soul of the lacquer thread sculpture. It takes several months to complete an art work of lacquer thread sculpture and takes local craftsmen several generations to be mastered and perfect. Like many other traditional Chinese arts, it is becoming increasingly difficult to find people willing to learn the craft nowadays.