Although different cultures have varying stories about dragon, some of them are said to be poisonous or evil, but in China the dragon is the highest-ranking animal in the animal hierarchy. It is held in high esteem for its dignity and power. Chinese people have a long held belief that they are descendents of the dragon, a tradition that is firmly embedded in the culture.

The ritual of embroidering dragon patterns on the emperor's robe, however, dates back to as early as the Zhou Dynasty (11th century-256 B.C.). But it was not until the Qing Dynasty (1644-1911) that they were named “dragon robes” and became part of the official attire system. The robe embroidered with dragon patterns was made for the exclusive use of an emperor.

A dragon robe is either yellow or apricot-yellow dragons in color, and embroidered with nine yellow dragons and five-hued auspicious cloud patterns. The clouds are interlaced with twelve other patterns—the sun, the moon and stars (representing the light of the throne), mountains (synonymous to stability to changes), auspicious bird (denoting elegance and beauty) water reeds (which represent purity and cleanness), and fire (meaning light). 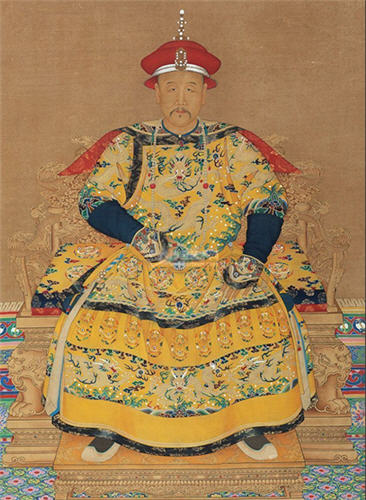 According to imperial Qing rituals, the emperor's dragon robe was a kind of auspicious attire for lower-grade celebrations and ceremonies—it as by no means the highest grade of imperial attire. The dragon robe that was passed down from one emperor to another is embroidered with a dragon on the front and the back, before or behind the knees, on the shoulders, and on the lining of the chest.

Thus a total of nine dragons are embroidered on a dragon robe. Observed from the front or behind it, five dragons could be seen at a glance, because in Chinese tradition the figures nine and five tallied with the dignity of the throne.