Cricket fighting is a kind of sport involving the fighting of male crickets in China. Unlike most blood sports such as bullfighting and cockfighting, cricket fighting rarely causes injuries to the animals. To play the game, two crickets are matched up according to size, weight, and color. Both combatants are placed in a small fighting arena, with walls high and thick enough to prevent desertion. The cricket trainers stimulate their charges with a straw or a fine-haired brush, and then the insect warriors go at each other, antennae waving and jaws snapping.

A big body, big jaws and a black face are the standard of excellence for a cricket. But to find a good one is not easy. You can either catch a cricket from your back yard, but they do not necessarily win. Crickets are often disposed of or released into the wild after the fighting season ends in late November. 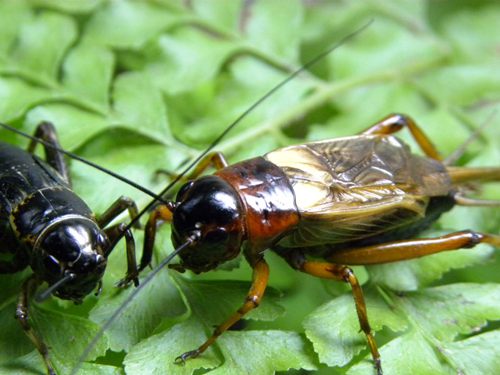 People who have seen the film "The Last Emperor" must remember one of the closing scenes: the elderly, brain-washed emperor walked into the Forbidden City, took out a dust-covered cricket pot from under his chair and passed it to a boy who watched him with intense curiosity. The scene vividly paints the picture of Chinese Cricket Culture.

Cricket Culture in China encompasses a history of 2000 years. The two millennium of tradition may be divided into three eras. From times prior to the Tang dynasty (500 B.C. - 618 A.D.), people only appreciated the cricket's powerful tunes. During the Tang dynasty (618 - 907A.D.), the imperial concubines used small gold cages to accommodate crickets and took them to bed to hear their singing during the night. Ordinary people copied what they saw as a graceful hobby. Under the Song dynasty (960 - 1279 A.D.), cricket fighting flourished as a popular sport. It is beyond the scope of this paper to produce a complete historic or chronological overview. Such activity was still flourishing during the Qing Dynasty (1616-1911), when the Emperor's family, city residents or village men and scholars, all collected crickets feverishly every summer. The tradition has ancient roots and has been handed down throughout the generations to the present day.

For centuries, China has regarded a cricket chirping around the house as an auspicious symbol, a deluge of cricket means wealth will come to the family. Now, cricket fighting is mainly found in the large cities of Shanghai, Beijing, Tianjin, Guangzhou, and Hong Kong. There are cricket fighting clubs and societies that cater to member’s interest at all levels of intensity. With the migration of Chinese to other parts of the world, cricket fighting can be found in New York and Philadelphia.