The Horse-headed fiddle is a bowed stringed-instrument with a scroll carved like a horse's head. It is popular in Mongolian music with a history of over 1,300 years. Horse-headed fiddle influenced European string music when Marco Polo brought one back from his travels through Asia. Its wide tonal range and deep, hazy tone color express the joy or pathos of a melody to its fullest.

Horse-headed fiddle was endowed by the Mongolian people a fantastic legend: during horse-racing at the Nadam Fair, a hero named Su He, and his white horse ran the fastest, which incurred the envy and wrath of the duke. The cruel duke shot the horse dead, and Su He grieved so much that he met his horse in a dream. In the dream, the horse told Su He to make a fiddle from wood and the hair of a horse tail, and to carve the head of the fiddle in the shape of a horse head. The lad followed the horse's advice and when he finished, the fiddle produced an extremely vivid sound. From then on, people loved this instrument and composed many songs for it. 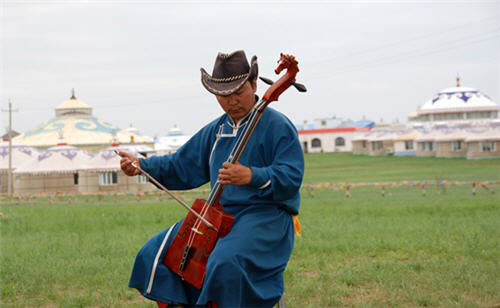 Originally named after the loquat fruit, the earliest pipa known was found to have been made in the Qin Dynasty (221 BC – 206 BC). By the Tang Dynasty (618 - 907), the pipa had reached its summit. It was loved by everyone from the royal court to the common folk, and it occupied the predominant place in the orchestra. Many well known writers and poets created poems and mentioned it in their works. Bai Juyi, the master poet, vividly depicted the performance like this: rapid and soft notes mingled were just like big and small pearls dropping onto a jade plate.

Afterwards, the pipa underwent improvement in playing techniques and structure. Players then changed from holding the pipa transversely to holding it vertically, and from using a pick to using the fingers to pluck the strings directly. In modern times, the volume and resonance has also been improved. The traditional music work Spring Moonlight on the Flowers by the River, which has a history of over one hundred years, has brought harmony and a sense of beauty to untold numbers of people.

The Erhu, also called Huqin, was introduced from the western region during the Tang Dynasty. During the Song Dynasty (960 - 1279), it was refined and improved and new variations appeared. It was an important instrument for playing the melody of Beijing Opera.

When playing, the player usually stands the Erhu on his lap, and moves the bow across the vertical strings. The well-known music Two Springs Reflect the Moon was created by the blind folk artist Liu Yanjun, also named A-bing by the people. Though he could not see anything of the world, he played his Erhu using his heart and imagination. This melody conjures up a poetic night scene under the moonlight and expresses the composer's desolation and hope. 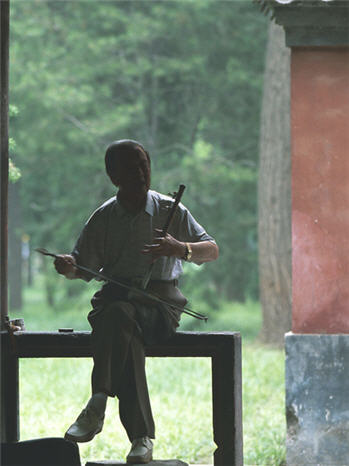 The earliest flute was made from bone over 7000 years ago. In the times since then, most flutes were made of bamboo, which allowed even common people to play. By covering the holes and blowing through the side hole while moving the fingers flexibly between the six holes, a sound will be produced that is leisurely and mellifluous like sound from far away. This always reminds people of a pastoral picture of a farmer riding on a bull while playing a flute. 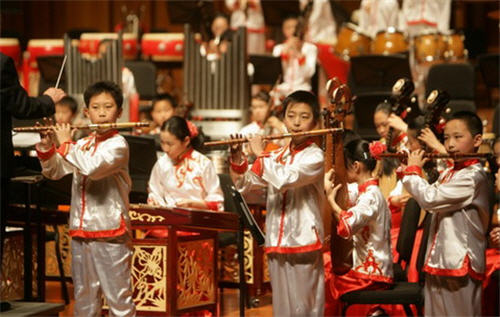