More than 2000 years ago, a favorite concubine of Wu Emperor of the Han Dynasty died of illness; the emperor missed her so much that he lost his desire to reign. One day, a minister happened to see children playing with dolls where the shadows on the floor were vivid. Inspired by this scene, the minister hit upon an idea. He made a cotton puppet of the concubine and painted it. As night fell, he invited the emperor to watch a rear-illuminated puppet show behind a curtain. The emperor was delighted and took to it from then on. This story recorded in the official history book is believed to be the origin of shadow puppetry.

Shadow puppets are used in Chinese shadow play. They were first made of paper sculpture, later from the hides of donkeys or oxen. That's why their Chinese name is piying, which means shadows of hides. Shadow puppetry wins the heart of an audience by its lingering music, exquisite sculpture, brisk color and lively performance.

One mouth tells stories of thousands of years; a pair of hands operates millions of soldiers. This is how the shadow puppeteer works. Nicknamed the business of the five, a shadow puppet troupe is made up of five people. One operates the puppets, one plays a horn, a suo-na horn, and a yu-kin, the Mandolin of the east, one plays banhu fiddle, one is in charge of percussion instruments, and one sings. This singer assumes all the roles in the puppet show, which of course is very difficult. The singer also plays several of the over 20 kinds of musical instruments in a puppet show. These ancient musical instruments enhance this ancient folk art.

The stage for shadow puppet is a white cloth screen on which the shadows of flat puppets are projected. Shadow puppet looks similar to paper-cut except that their joints are connected by thread so that they can be operated freely. The scene is simple and primitive; it is the consummate performance that attracts the audience. For example, a puppet can smoke and breathe out a smoke ring with operator’s help. In one drama, as a maid sits in front of a mirror, her reflection matches her actions. The operator plays five puppets at the same time, each of which has three threads. Ten fingers handle 15 threads.

To overcome the limit imposed when only the profile of puppets can be seen, shadow puppets use exaggeration and heavy dramatization. The faces and the costumes of puppets are vivid and humorous. The flowery color, the elegant sculpting and smooth lines make shadow puppets not only props but also artwork. A shadow puppet takes as many as 24 procedures and more than 3000 cuts. The figures all have a large head and a small body. A man has a big head and a square face, broad forehead and a tall strong body without being too masculine. A woman has a thin face, a small mouth and slim body without being too plump. Effeminacy and tenderness are the norm for Chinese beauty. Scholars wear long robes with an elegant demeanor, while generals in martial attire bring to mind bravery and prowess. 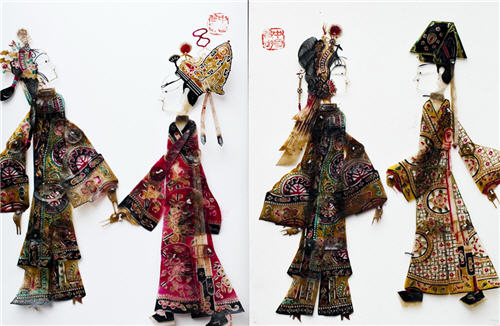 The design of the figures follows traditional moral evaluation and aesthetics. The audience can tell a figure's character by seeing his mask. Like the masks in Beijing Opera, a red mask represents uprightness, a black mask, fidelity, and a white one, treachery. The positive figure has long narrow eyes, a small mouth and a straight bridge of nose, while the negative one has small eyes, a protruding forehead and sagging mouth. The clown has a circle around his eyes, projecting a humorous and frivolous air even before he performs any act. 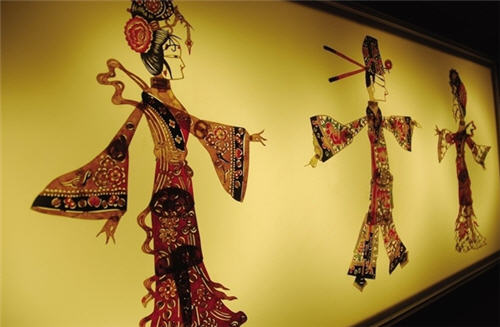