Lacquer ware is a traditional Chinese craft which has a long history of 7,000 years. In 1978, when some red lacquer bowls and tubes of the Hemudu Culture were found in Yuyao, Zhejiang Province, scientists found the coatings are natural lacquers, and finally proved the history of lacquer.

After the Han Dynasty (202 BC—220 AD), the variety of lacquer ware increased. The production process was very complicated and lacquer wares were very expensive. It came in many varied forms and was widely used for furniture, utensils, stationary, art works, musical instruments, funeral goods and weapons. Compare to bronze wares which has been used widely by nobles, lacquer ware became more favored since they were bright, light, easy to clean, had heat insulation and corrosion resistant qualities and could be inlaid and painted with many colors.

Black and red colors are widely used to paint the lacquer wares. The contrast between the black and red colors creates a special artistic effect. To be specific, the black and red pictures on the lacquer ware present a mysterious and ever-changing fairy world inhabited by human beings and immortals. In a painted design of one piece excavated in a tomb in Gansu, there are 90 immortals, birds and beasts with different postures and expressions. The immortals are dancing with their long sleeves waving in the air, sitting quietly with their chins in their hands, or shooting arrows with concentrated expressions. The animals being hunted are turning their heads in panic and running swiftly away. Beautiful patterns of dragons, phoenixes, leaves, grass, cloud and various other things were drawn on the lacquer ware objects to add to their elegance. 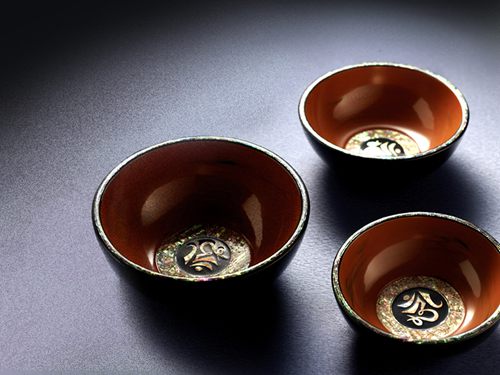 Some lacquer wares were painted with fairy tales. For example, the ancient Chinese tale of Hou Yi Shooting the Sun was painted on a black coated and red design clothing box excavated in Zenghouyi Tomb in Hubei. Mushroom-shaped and colored clouds and two twisting double headed snakes with human faces form the background. On the two sides are two trees, the tall one with 11 branches and the short one with nine. On the tip of each branch is a circle radiating brilliant light, symbolizing the sun. Between the two trees, a man shoots an arrow at a bird on the tall tree. The story demonstrates mankind's successful battle against nature.

In the modern society, lacquer ware is still used as by Chinese people. If come in China, you may find that many boxes, plates, earrings, bowls, baskets, trunks, rulers, kettles, chessboards and stools are coated by lacquer. Meanwhile, many new crafting techniques and decorative methods were also developed.