It's no surprise that there are so many different ways of speaking Mandarin, since China is so vast a country. As a matter of fact, the dialects of Chinese bear more resemblance to sical forms of the language than to standard Mandarin. The official version of the language is known as Pǔtōnghuà (普通话), and it is based on the northern dialects including Běijīnghuà. Here is our quick guide to the main non-standard dialects, including useful phrases.

Standard Mandarin was given official status under the Qing Dynasty, who referred to it as guóyǔ (国语). It was based on the language spoken in the northern regions of China, centred on the capital. However, the dialect of Beijing is different from Pǔtōnghuà. The most striking variation is the exaggeration of the ‘r’ sound, known linguistically as rhoticization. The Chinese call it érhuà, and it gives the dialect a ‘pirate’ sound. Bùzhīdào (“I don’t know”) sounds more like bùrdào, and the shopping street Dà Zhà Lán comes out as Dàshlàr. Speakers of Běijīnghuàplace greater emphasis on tones, which is why Mandarin learners find the Beijing accent easier to understand. As for vocabulary differences, there is a vast lexicon of Beijing slang that can be difficult to decipher for outsiders. 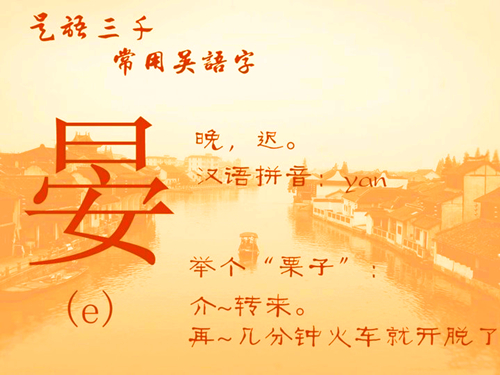 Widely known as Shanghainese, the Wú dialect is spoken by 77 million people in Shanghai, Zhejiang Province, south Jiangsu, and parts of Anhui, Jiangxi and Fujian. Wú can be split into several sub-dialects including Sūzhōuhuà, Wēnzhōuhuà and Shànghǎihuà. The Suzhou variant used to be the prestige version, lauded for its softness and nicknamed “wú róng ruǎn yǔ” (the tender Wu language). However, as the city of Shanghai grew in population and importance, the harsher Shànghǎihuà became the representative dialect of Wú. Spectators were less generous, mimicking the way Shanghainese locals speak, as “ji ji ga ga”. If you’ve spent any time in Shanghai, you’ll probably have heard phrases like “Nong ho!” (equivalent of ni hao), “ho va­” (hao ma­) and tze wei (zai jian).

Also known as Guangdonghua, the Yue dialect is spoken by over 71 million people in China, and many more in overseas Chinese communities. Its representative sub-dialect is Cantonese, spoken in Hong Kong and much of Guangdong Province. Yue is almost impossible to understand by members of other dialects as well as speakers of standard Mandarin. It is actually closer to Classical Chinese in pronunciation and grammar than it is to Pǔtōnghuà. The dialect developed early in Chinese history, during the Qin Dynasty that began in 221 BC. It was the official language of the Tang Dynasty (618 - 907 BC) and some ancient poems still rhyme when read aloud in Cantonese, unlike Mandarin. Cantonese has a reputation for being harder to learn than Mandarin thanks to its multitude of tones (six or nine, depending on how you classify them). Useful phrases include “Nei hou” (hello) and “Ngo hoi nei” (I love you).

The Hakka dialect (not to be confused with Hokkein – see below) is spoken by around 34 million people in southern China, in the provinces of Guangdong, Fujian, Jiangxi, Guangdong, Sichuan, Guizhou and Taiwan. Taiwanese Hakka and the form spoken on the mainland have slight differences in pronunciation. The ancient Hakka people originally came from Henan and Shaanxi Provinces in the north of China, but the modern dialect has more in common with Cantonese than with standard Mandarin. It is to Cantonese what Spanish is to Portuguese. Like many of the older dialects, Hakka has many regional variations and sub-dialects, but the main characteristics of the tongue are the presence of final consonants –p, -t, and –k from Ancient Chinese which did not survive into standard Mandarin. To impress your Hakka friends, say “Ngi ho” (hello), “Tsai kien” (goodbye) and “Ngai oi ngi” (I love you).

Gan is the official name of Jiangxihua, the dialect spoken in Jiangxi Province, northwest Fujian, and parts of Anhui and Hubei. The name Gan relates to the river that runs through Jiangxi. The most ‘prestigious’ form of the dialect is spoken in the city of Nanchang, and sounds a little like Cantonese. Gan uses one more tone than Mandarin, and has a good few variations in vocabulary. It was developed during the Qin Dynasty when Han troops travelled south to colonize the Baiyue Kingdom.

Between 30 and 40 million people speak the Xiang dialect of central and southwest Hunan. Other pockets of speakers are found in 20 counties of Sichuan province, as well as northern Guangxi and parts of Guangdong. The dialect is split into two varieties, New Xiang in the south and Old Xiang in the north (which is less like Mandarin). One of the most striking differences between Xiang and standard Mandarin is the interchangeable ‘l’ and ‘n’ sounds, as well as the six tones compared to Mandarin’s four. Instead of “ni hao”, Xiang speakers say “li haw”, and “tsai jyeng” instead of “zai jian”.

Incredibly, if Sichuanese were an independent language, it would be the tenth most widely spoken in the world. As it stands, the dialect is spoken by 120 million people, mainly in Sichuan Province and the Chongqing municipality. Mandarin native speakers find the dialect almost impossible to understand, but within itself it is remarkably uniform. This is due to the fact that it was developed predominantly during the Ming Dynasty (1368 – 1644) from an older dialect called Bashu. As with most non-Mandarin dialects, Sichuanese is in danger of dying out due to the national push towards Pǔtōnghuà. If you’re in Sichuan and want to chat to the locals, say “lee hao” (hello), “syee syee li” (thank you) and “wao gao boo chen zan” (I don’t understand).

Fujian Province on China’s southeast coast is home to around 60 million speakers of the Min dialect. It is also spoken by Fujianese migrants in Guangdong, the Zhoushan islands off Ningbo, Hainan Dao and Taiwan. Due to the ancient origins of the dialect, there are many variations – at least nine subdivisions. Min Nan is spoken in the south, while Min Dong is more prevalent in the east. The Hokkein speech of Taiwan and Amoy (Xiamen) is the most widely spoken variant, followed by Teochew. Ask someone their name in Min by saying “l­­ kiò siá­-mih mia­” and respond with “Góa ê mia s­ó...” when they ask you.