Chime Bell, Sound of Music Thousands of Years Ago

Cast with bronze, chime bell is a percussion instrument in ancient China. It consists of oval bells in different sizes arranged to the order of the pitch hanging on a huge bell cot. Different tones can be produced when beating the bells with a wood hammer and a long stick. Beautiful music can be performed when beating to the tune. 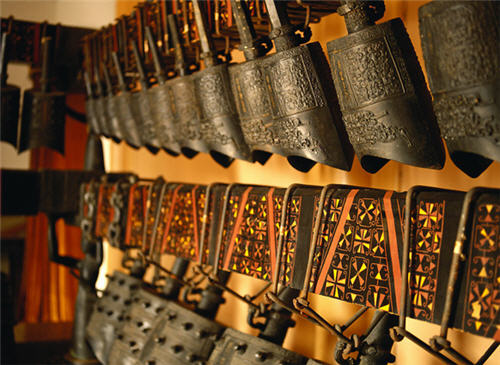 Among the excavations, there are 64 articles of bronze chime bells preserved in good condition, which can be divided into eight groups according to size and tone order and hung on the three-tiered bronze-wooden bell cot. This is the largest and most intact set of chime bells that exists today in China. The largest bell is of a person's height, weighing over 200 kg.

Inscriptions in Zhuan script inlaid with gold are engraved on the body of each bell. Its total volume range covers five octaves, slightly less than modern pianos. The set of bells is beautiful and mellow in tone color, featuring a whole set of high, medium and low voice parts, while inflexion is allowed for some modes of ancient Chinese music. It can virtually play all of the 12 semitones, as well as melodies from pentatonic to diatonic scale.

The excavation of the chime bells astounded the world's archeological society, since it's extremely rare in the world cultural history to find such exquisite musical instruments and magnificent band existed over 2000 years ago. It is the embodiment of our great achievement in bronze casting, our proficiency in music science and the wisdom of our people in ancient China. 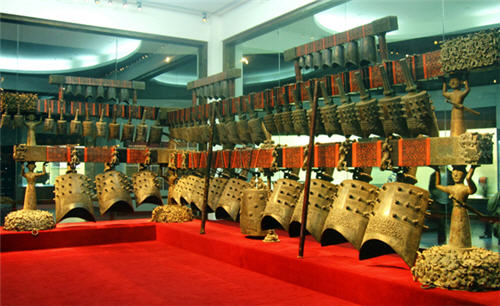