“Hanfu” which appears frequently these years as a symbol of China is always referred as traditional Chinese clothing all around the world. Actually throughout the Chinese history of more than 5000 years, clothing style experienced a notable changing from the ancient time to modern era. Each historical period features different characteristics. 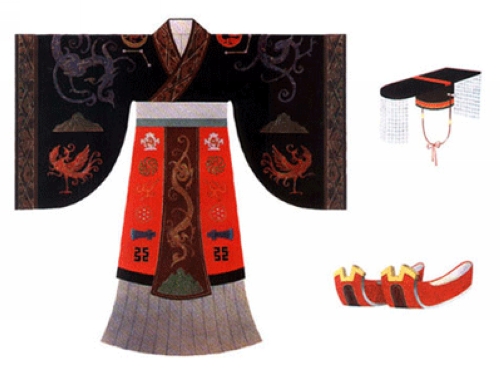 The Qin Dynasty (221 BC – 206 BC) was the first imperial dynasty of China. With the establishment of extremely strict hierarchy among the society of the time, clothing style experienced a prominent changing from the Warring state Period (475 BC – 221 BC) which consisted of several independent states. In the Qin Dynasty black was used as a superior color to symbolize the power of water, thus clothing and adornments of noble people were all of dark color or simply black while common people could only wear cloth made of linen, colored with white, buff or pale yellow. Traditional daily costume of people in Qin Dynasty was robe, people from different social status wear accessories made of different materials. For example the emperor wear a hat decorated with jade while minister could only use bronze.

Qin Dynasty had a short history of only 15 years. The next dynasty called Han Dynasty extended and further developed Qin Dynasty’s clothing. Costumes of the Han Dynasty had 6 features. Collar of underpants was exposed; clothes must be sewed with white thread; the width of sleeve was 0.4 meters; the blouse had no sleeve; fur must face outside, and waistband was always exquisite.