Drinking soup first and then eating rice is a traditional Cantonese habit. The soup cooked in many homes and restaurants in Guangdong tastes delicious, and many Cantonese housewives have unique soup-making recipes. It is crucial to select a good soup when entertaining friends and family members. At restaurants, the waiter will promote soup before introducing other dishes. Boards listing varieties of soups are familiar sights outside hotels, restaurants and sidewalk snack booths. Some eateries present rows of shiny dark jars containing soups that are slowly simmering, and also emitting wonderful scents that draw passers-by into the shops.

Drinking soup as dietetic therapy is a tradition in Guangdong cuisine. Depending on a person’s physique, it often calls for drinking different kinds of soup in different seasons. It is believed by many Cantonese people that soup plays a role in clearing heat, nourishing beauty, strengthening physical health, preventing and curing diseases, and nourishing vital organs of the human body. 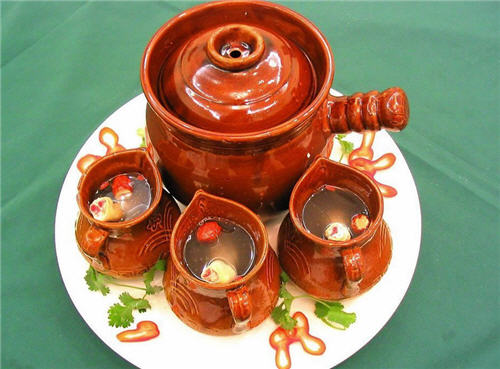 Therefore, the Cantonese soup is very rich in content. In a relatively dry season, there are varieties for moistening the lung and building healthy blood. There is cool-natured soup for angry people, and heat-intense soups for people who are cold. There are also various kinds of soup especially for the good of women.

Cantonese soup-lovers are very particular about soup containers, for the containers are crucial to the taste of the soup. Cantonese people tend to prefer a casserole with a delicate texture as a soup container. Crock pots also are popular for slowly simmering soup to extra the most flavors from the ingredients. Heat control is also very important as well. The key is to first boil soup over a big flame and then simmer it over a small flame. This process can take three hours, while making a soup stew can take four hours.

In the eyes of some outsiders, the Cantonese people seem to like soup too much. But their passion for soup is deeply rooted in Cantonese culture and history. 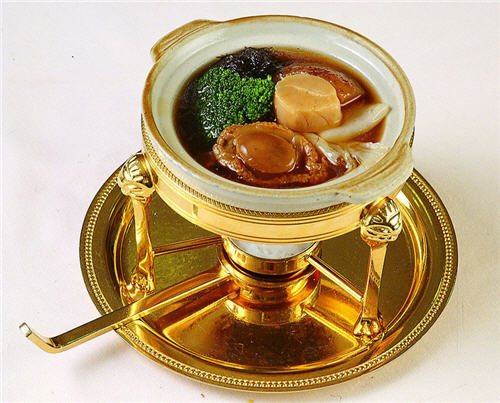