Bamboo Buildings of the Dai Ethnics

Dai ethnic bamboo buildings are mainly distributed in the whole territory of Xishuangbanna, and Ruili of Dehong Prefecture. It is a stilt style building that takes bamboo as the main construction material.

Generally, the people living in the bamboo buildings of the Dai ethnic minority are called Water Dai people. The reason is that they mostly live in the river valleys that are characterized by low terrain and abundant rainfall. The stilt style building is conducive for avoiding insects, snakes and beasts; they are also damp-proof and well ventilated. As a result, Water Dai people take the local materials as the major form of folk houses. 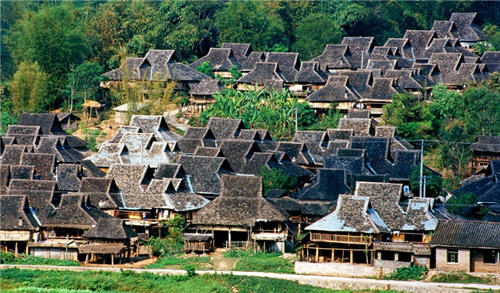 The bamboo building of Dai ethnic minority uses wood as the framework, and bamboo as the purlin, rafter, floor, wall, ladder, handrail and so on. The roof is laid with grass or tile. The bamboo buildings of this kind are completely different from the closed yard of the Han Nationality, whose house are characterized by symmetry and compact forms. The yard of the bamboo building is open and the layout is flexible and changeable.

In general, the building is made up of a hall, rooms, front corridor and terrace in the upstairs and staircase as well as the stilt layer in the downstairs. Fireplace in the hall is the center of the bamboo building. The fire is handed down by the ancestors of the family and it shall be kept burning forever. Usually, the family members use the fireplace to cook or dry clothes; when there are guests, they will surround by the side of the fireplace to enjoy tea and have a cozy chat. The roof, commonly called the cap of Kongming, is molded like a mountain. The name is originated from the legend that Zhuge Liang, whose literary name is Kongming, taught the local people to build the house according to the local conditions, and shaped like a cap. 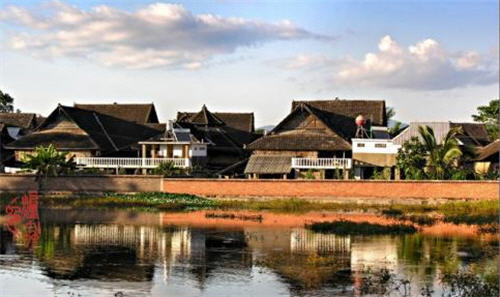 Each bamboo building has a small yard surrounded by fence, with the tropical plants such as banana and so on planted inside. In Xishuangbanna where the temperature is high, the main house of the bamboo building is expanded with a circle of peripheral columns for the purpose of keeping out burning sun, or windows are opened on the exterior wall of the hall so as to make it convenient for the circulation of air and cooling.

The bamboo buildings of the Dai people are usually single building which is suitable for the living of a small family. That is because Dai people follow the youngest son inheritance system which means that the older sons and daughters have to separate with their parents and live all by themselves. The scale and size of bamboo building can be reflected by the number of wooden pillars in the floor of the building. Larger bamboo building has seventy to eighty pillars. The Water Dai people also take advantage of the different color and texture of the front and back side of bamboo to arrange different beautiful and unique pictures with bamboo. 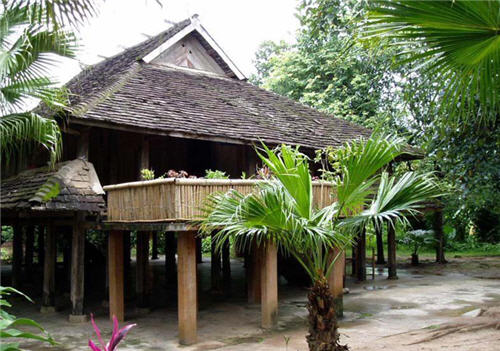 Buddhist culture deeply influences the distribution and folk house forms of the Water Dai people's villages and stockaded villages. The Water Dai villages and stockaded villages, usually distributed by the hilly country near the paddy field or by the side of mountains, are made up of folk houses and Buddhist temples. The local people believe in Buddhism, so folk houses cannot be located in the neighborhood, especially the opposite side of Buddhist temples. What’s more, the height of floor of folk houses cannot surpass the plane of seat stand of Buddha statue. 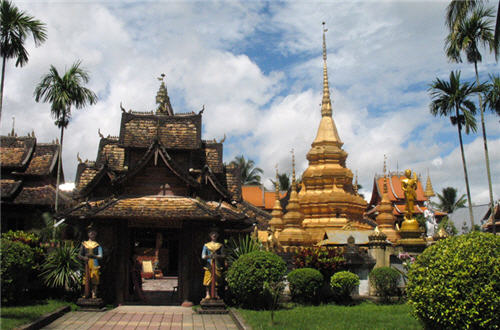