Archaeologists have recently discovered the most complete ancient crossbow to date in the terracotta army pit one in Xi'an, Shaanxi province.

Among hundreds of pieces of crossbows unearthed in the past, this one is said to be the best-preserved in general, with a 145cm arch and a 130cm bow string. The bow string has a smooth surface which experts believe to be made from animal tendon instead of fabric and the trigger mechanism is made of bronze, according to Shen Maosheng, head of the archaeological team. 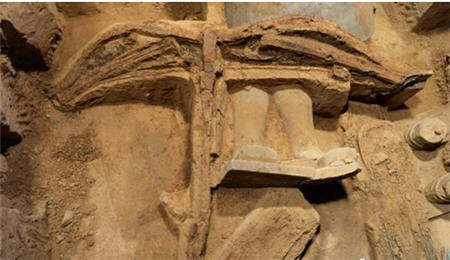 Shen also points out that this new discovery sheds light on how Qing, two wooden sticks usually discovered alongside the weapon, were used to maintain and transport the crossbows in ancient times. Although ancient documents often mentioned Qing, its function had never been clearly identified until this recent discovery.